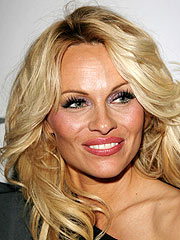 I really love vapid celebrities. And I really love it when vapid celebrities marry each other. The only thing better is when trashy celebrities marry other trashy celebrities - - and then split up! (See the Kevin Federline-Britney Spears union).
Pam Anderson has apparently made People news today, for declaring that Kid Rock was too “self-obsessed” to make their marriage work. Hee! Is saying “isn’t that like the pot calling the kettle black” too cliché? Maybe the Pam/Kid union didn’t work because they fought over the hair care products? Or maybe Pam should stay away from musicians? And marriage? And thinking? Just a thought.
But back to Pam and her deep thoughts. “As for new love – I need a man with interests outside of himself – someone with similar beliefs...that would be sexy.”
So, if there are any men out there, who don’t give a rat’s ass about themselves (nor care about Hep C or following in Tommy Lee’s uh, substantial footsteps), have little to no brain waves and share the similar belief that Saint Tropez is so festive, you’ll marry just about anyone who’s game, give Pam a call.