Trying to dig herself out of that hole . . .


Okay, so Smallville managed to come back a little bit last Thursday with an episode that pretty much highlighted Lana. I'm still not a fan and I figured out who the bad guy was almost immediately (when it of course took Lana the entire episode - - guess Lex doesn't care too much about the old brain cells) but at least Lana had more to do than just stare at either Lex or Clark or Lex and Clark, looking confused and borderline teary. Still, the writers need to find a vocation for Lana. She apparently sits around the Luther mansion all day, worrying. Worrying about Clark. Worrying about her feelings for Clark. Worrying about Clark's secret. Worrying about marrying Lex (understandable). Heck, the girl needs a Prozac smoothie and a course list for Smallville U. Can't she take a class or two? Or maybe start a business or foundation? Wasn't she running the Talon? What happened to that? Maybe Lana should be honing her investigative reporter skills and trying to dig up the truth on Clark, while on someone's payroll, rather than making that her extracurricular 'what to do when Lex is out of town' activity.
I still think the Justice League needs to come back. Clark will have worthy cohorts and something to keep him busy and take his mind off Lana. Having Lois constantly popping up isn't worthy of the show or my time. I know Lois is supposed to be his future and supposedly the love of his life, but couldn't they tone her down and make her a little more focused? Must she really be that ditzy? I don't think the term "dumb blonde" was coined for Lois Lane.
I wonder if my husband is correct, and Smallville is down to its last season? 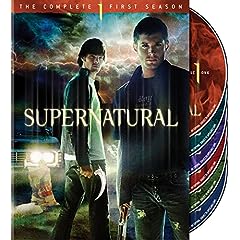 The CW show that I really love? Supernatural! It's funny, it's scary, it's suspenseful, and Jared Padalecki and Jensen Ackles make the show worth watching, playing two brothers as two adult brothers really act. Think of all the urban legends you heard and told others as a kid - - the killer in the woods with the hook for the arm, the Hell Hounds, the mysterious old car that appears on foggy nights to take people out, Bloody Mary. Supernatural has covered them all, and then some. The Bloody Mary episode was a particularly frightening one, as I was one of the girls from the late 70s/early 80s who, at slumber parties, would go into the bathroom, turn off the light, lock the door and take the dare to say "Bloody Mary" three times. I never failed to say it the third time, but I also never failed to rush my frightened ass out the bathroom before anything remotely looking like a female figure could appear in the mirror. But I digress.
This past Thursday's episode was classic, with younger brother Sam being possessed by the yellow-eyed evil spirit. Possessed Sam was a naughty boy, killing another "Hunter", and Dean was faced with the possibility of killing his kid brother. Of course he didn't do it, that would mean the end of the show, but having the always moral, take the high road Sam an evil, unrepentant killer was genius. This is one show that never fails to disappoint and never fails to send a good chill or two down your spine. And what isn't there to love about two brothers with the following exchange: (edited due to my memory)
Dean: We're going to Los Angeles.
Sam: Los Angeles? What for?
Dean: There's a girl that's been brainwashed and kidnapped by an evil cult.
Sam: Really? Does the girl have a name?
Dean: Yeah. Katie Holmes.

Hee! A CW show that has the balls to make fun of Robo-Bride. Love. It. Rebel with a cause Dean, older Winchester brother
Posted by Lori Johnston at Monday, February 12, 2007

Lana earns reprieve due to the good and positive behavior. All the actions have been estimated for the full use of the relaxation for the man. The characteristics have been managed for the success of the community.