Simon Calls Out the Pink Elephant 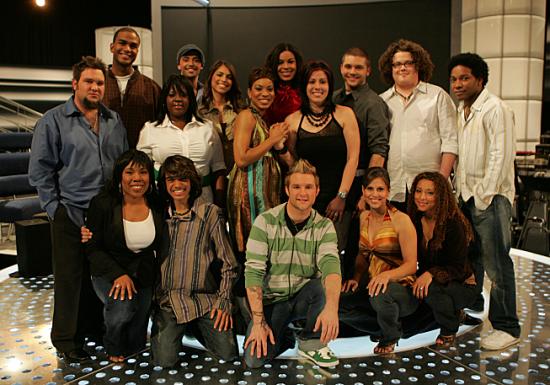 There's been a pink elephant on the American Idol stage since the beginning of this season and, for the most part, everyone has looked the other way, danced around the issue. Until last night. Simon finally acknowledged the elephant.
While I will say that Antonella sang better last night than she has during the entire competition thus far, she still sucks ass. She's not a bad singer, as in breaking glass, but she's not a particularly gifted singer. She could do karaoke and maybe sing in her church choir, provided that she has other good singers to muffle out some of her problems.
But last night proved that she is simply way out of her league with the other ladies. She doesn't have the range they do, she doesn't have the pipes and she certainly doesn't have the maturity to accept criticisms with an ounce of class.
Simon has never spoken truer words than telling Antonella that the gig is up, let's get real, she's gone as far as she can honestly expect to go and he doesn't see her voice getting any better. (Go, Simon!) Antonella's expression, once again, was priceless. See her jaw set, see the evil glint in her eyes. She's probably already thinking ahead to telling Daddy that she wants Simon whacked. (Watch out, Simon!)
And what she does say? She doesn't want to be compared to the other singers. Ummm . . . this is a singing competition, right? We're not talking about who sings the blues best, or rock . . . we're talking about who is the best singer. Which you obviously are not. Apparently Miss Antonella has never heard the word "no" in her life (and based on some of the internet photos, hasn't said the word much other, heh) and her "I am so entitled and just as good if not better than anyone else because my daddy told me so" attitude is getting really, really old.
Seriously, people, it's time for the charade to end. Vote this demented ho off Idol so she can give her story to some lame ass grocery store tabloid and then do a spread in Playboy. Because, really, that's all she can hope for.
Posted by Lori Johnston at Thursday, March 08, 2007