American Idol: Competition Gets Tighter as Idol Gives Back 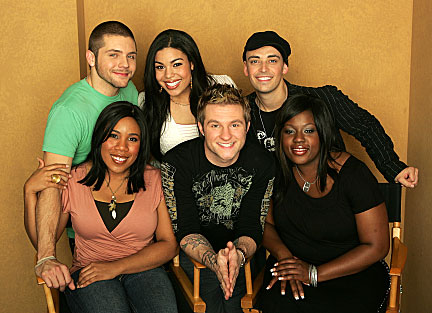 The theme for last night's Idol was inspiration and all the singers pretty much brought it (it's about time!) Simon and Paula obviously got the message from last week and refrained from playing "Gotcha nose!" and actually paid attention to the singers. The shirt Randy was wearing was giving me a paisley-induced headache. Ryan's two tone tie was freaky. All this before even the first song!
So we're told that inspiration and giving back is the theme and Bono is the mentor, for obvious reasons. Way cool.
Chris gets the craptastic first slot and he selects Eric Clapton's "Change the World". Chris is actually decked out in a jacket and tie on top, and cargo-like pants on the bottom. Can't expect him to be fully decked out, I guess. His performance starts out a bit shaky and improves by the end, but even Mr. PS says it's not Chris' best performance (and Mr. PS really wants to support the former Hooters employee). Unbelievably, though, the judges proceed to give him a tongue bath. WTF? Is the sound on my t.v. jacked? Do I need to clean out my ears? It wasn't terrible, mind you, but worthy of excessive praise thrice over? I think not.
Now comes Melinda and is critiquing even necessary at this point? Wouldn't it be more fair to just say Melinda would have sung Faith Hill's "There Will Come a Day" and kept the microphone from her? Girl can do no wrong, especially now that she has deep sixed the "who me?" front.
Wait a minute, wait a minute. Where the hell is Bono? Why aren't we seeing any guest mentor clips? I call b.s. on this!
Blake is up next and he looks seriously subdued and whipped. I think being in the Bottom Three last week scared the hair gel right out of him. Blake has chosen one of my favorite songs ever, "Imagine" by John Lennon. I think he does a respectable job; after all, it is Lennon and the song is all about vocals, certainly no room for beatboxing. After the gag-inducing tongue bath given to Chris, Blake only gets a lukewarm reception. Randy was waiting for Blake to jazz it up (it's "Imagine", Randy!), Paula understands Randy's concern (let's all drink from Paula's Kool Aid, shall we?) but gives Blake appropriate props for singing a slow, moving song very sincerely, and Simon seconds Paula's props on the sincerity front and says he liked it.
I feel worried for Blake.
Now we have LaKisha, who simply must kick ass and take numbers tonight after last week's scare. Kiki informs us that she has chosen Fantasia's "I Believe" and I think there is a collective groan from every Idol watcher in America. Did she not learn from last week's take on a former Idol? While I'm not familiar with Fantasia's version, I don't think Kiki does a half bad job. She certainly puts her pipes to good use in the end, and she really does look pretty in a black dress, with the girls properly covered up and contained. The judges like her, but of course, draw comparisons to Fantasia's version and even go so far as to say that there are certain artists you just don't touch, like Mariah, Celine, Whitney - - I guess Fantasia is on that list now too? Anyhow, I don't think Kiki was half bad but I don't think it's really fair to compare her to someone else. Moving on though.
Phil is up next and after his awesome country performance last week, he smartly chooses Garth Brooks' "The Change". Obviously Phil needs to stay with country. He can obviously sing and country seems to be the best niche for him. The judges agree, for once. All of them liked the performance, Paula deemed it Phil's best, and Simon even gave Phil a compliment on the performance and told him he should go with country.
Jordin gets the pimp position of the night and she has selected the classic "You'll Never Walk Alone". She looks lovely and it is indeed shocking to remember that she is only 17. The judges are beside themselves with admiration and adoration over Jordin. Randy tells her that was simply the best performance he's ever heard on six seasons of Idol, period. Paula tells her she's glorious and Simon gives her the usual props.
Don't get me wrong - - Jordin is good. Very, very good. But I think it's pretty obvious that the judges are 200% behind Chris and Jordin, almost no matter what they do.
Anyhow, big reveal tonight - - and TWO HOURS of Idol giving back. Oi vey.
Posted by Lori Johnston at Wednesday, April 25, 2007