The Cruise-azies Kick that PR Machine into High Gear 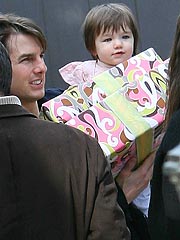 Boy, those Crazy Cruises have been quite busy this past week. First, the KateBot goes back to work, on her "comeback" film, Mad Money. I don't know about the vast majority of the population, but I don't consider one heavily photographed costume fitting "work", but hey, call me a pessimist. So KateBot jets on down to Shreveport, Louisiana on Friday, rubs elbows with the locals at Target (her elbows I'm sure she immediately doused with niacin in order to get them back to Scientology status) and then flies back to L.A. on Monday so she can have dinner with Captain Scientology at the so-discreet and under-the-radar restaurant Cut. Um, yeah. And the reason for this would be? I'm guessing it was a photo op to debut the Mini-Messiah's amazingly refreshed looking mug. Of course, KateBot looks like her usual craptastic self, the only new addition being a space age silvery jacket she appears to have stolen from David Bowie during his Ziggy Stardust period. So we assume that KateBot then returns back to the Mad set, only to have allegedly been back in L.A. on Wednesday, in order to celebrate the birth of her cash cow, her "little honor", Suri's official first birthday. Rumor has it that the party was complete with a butterfly and dragonfly motif and that KateBot's mom jetted from Toledo for the shindig. So on Thursday, the Mini-Messiah pulls out all the stops, for his Scientology benefit in New York. If he was debuting a freshly refreshed face on Monday night, they need to up the dose because girlfriend is looking haggard. Shaggy, mangy looking hair, sweaty, flushed and plump cheeks . . . ewwwww. Not exactly Top Gun. And did someone tell the KateBot that it was 80s night? How else to explain the leggings under her tunic/dress, and the clunky gold belt? Any beard worth her black American Express card knows that girls with thick legs should really avoid leggings. Does Tommy Boy never look at his employee before leaving the house?
So things are quiet on the Cruise-front for a day, and then, just like a bad zit, they reappear again, this time on Saturday, en route with The Little Honor, Suri herself, to Grier Henchy's birthday party. And Captain Cruise-azy is again looking refreshed and almost pretty. I have to wonder, did Nicole give her ex the name of her cosmetic surgeon? And with all the attention that Cruise-azy pays to himself and his appearance, how is he letting his arm candy look so assy? Really! Going to a children's birthday party, in Beverly Hills, dressed in a crummy oxford shirt, jeans and with stringy, heavily unconditioned hair? And no makeup? Did Tom use all the makeup? How is the KateBot getting so much time off from the movie set? Is her role the equivalent of five minutes' screen time? Exactly how big are Tiny Tom's lifts? So many questions. 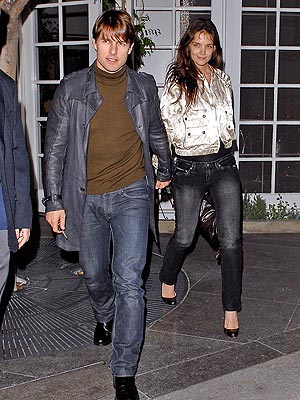 The First Lady of Scientology, with Katie
Posted by Lori Johnston at Tuesday, April 24, 2007