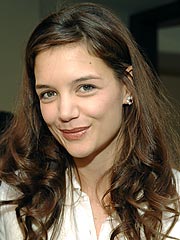 KATEBOT 2007 spotted in Shreveport . . . Katebot escaped the clutches of the Tiny Terror to film her comeback, sure to be straight to DVD, film Mad Money in Louisiana and graces the lucky little people with her queenly presence at Target. That's right folks, she lowered herself enough to shop at Target. Because there is no Barney's New York in Louisiana. "I met some really great people," so says the Queen of Cruise, "it was nice and they did recognize me." Congratulations, Katie! That means two years of fraud upon the general public has paid off! You have been spotted! What else did Tiny Tom's mystified Amazonian and apparently meager missus have to say? "We had nice chats about kids. It was lovely." Lovely? Who describes shopping at Target as "lovely"? And what could Katebot possibly have to say about kids? She's seen them before? Maybe she even has one, although she may not be able to pick her child out in a crowded room. Anyhow, no reports on what Katebot purchased at Target. I'm betting on ribbons and cupcakes.

WTH is wrong with MATTHEW MCCONNAUGHEY? Does the guy even work anymore? I mean, we know he works out. Excessively. In excessively public places. Listen, Matt, we know you're all into the zen and yoga and balance and chi and becoming one with nature. We know you have a great bod, although that shaggy chic from the neck up is seriously lessening your hot quotient and putting you into the "ewwwww" category. So, please, please, please . . . cut your hair. Shave your face. And other than bike riding or running, work out in private. Do I really need to see you working out on a picnic table next to your Airstream? Didn't think so.

BRITNEY SPEARS is now blaming manager Larry Rudolph for introducing her to Paris Hilton and causing all her problems. While introducing Brit to Paris was a total bonehead move, I also think it equates to introducing Hep C to HIV. Hep C's eventually gonna get you, but HIV will speed the process along. Does anyone besides Britney feel that homegirl would have crashed and burned with or without Paris' skanky influence? Seems to me that Brit needs to stop playing the blame game and start playing the single working mom game.

It's official. JOHN TRAVOLTA has entered the Kingdom of Cruise-azy. While he's not (yet) spouting the ridiculous banter that has come to characterize the Mini Maestro - - you know, the statements about not being gay, how he's the Jesus of Scientology, how he's 5'9" - - JT apparently considers himself as big as Marilyn Monroe and Elvis but will not befall their fates because of his belief in the alien beings living inside of him, a/k/a Scientology. Look, I love Grease. Urban Cowboy is a guilty pleasure. JT was perfectly cast in Pulp Fiction. So why does he make me wish he was sitting on a toilet and gasping for breath?
Posted by Lori Johnston at Tuesday, April 17, 2007