Network Executives are So Smart!

Particularly the ones at NBC. They gave The Black Donnellys, what, something like four episodes and then decide to cancel it? But sure, let's leave Wife Swap on, because that's quality t.v. right there.
In case you don't know, Donnellys was the censored-for-primetime-t.v. version of The Sopranos; or, rather, the early Sopranos. The story centers around an Irish-American family, the Donnellys (duh!) - - widowed mother Helen and her four adult sons, Tommy, Jimmy, Kevin and Sean, all of whom are caught in the underbelly of New York's organized crime. The episodes are told in flashback, through character Joey Ice Cream, in prison and talking to the cops. We are told in the beginning that brother Tommy is the most "salvageable" character of the quartet; he's in art school and seems dependable and anxious not to fall into the criminal schemes that his brothers fall prey to. Due to a childhood accident, Tommy has also spent most of his life trying to make up for a mistake and tends to make excuses for brother Jimmy, who is anxious to make it big financially and be the head man in charge. Brother Kevin gets pulled into Jimmy's schemes and is addicted to gambling. Brother Sean takes a beating for Jimmy and thinking he has lost his model good looks, decides to drop out of school and become Jimmy's henchman. To further complicate matters, Tommy is desperately in love with Jenny, a lovely girl he's grown up with but who cannot see him as boyfriend material because she knows the crowd he runs with.
Sounds great, doesn't it? It really is. And I would imagine that once Heroes returns from it's ill-timed hiatus, ratings for the Donnellys would greatly improve.
Go to www.nbc.com and click on "contact us" to email NBC a short missive on how boneheaded and basically moronic their decision to cancel is. Save the Donnellys! 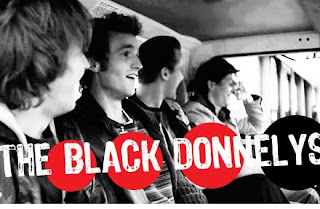 Save the Donnelly brothers!
Posted by Lori Johnston at Wednesday, April 11, 2007

Email ThisBlogThis!Share to TwitterShare to FacebookShare to Pinterest
Labels: NBC, The Black Donnellys