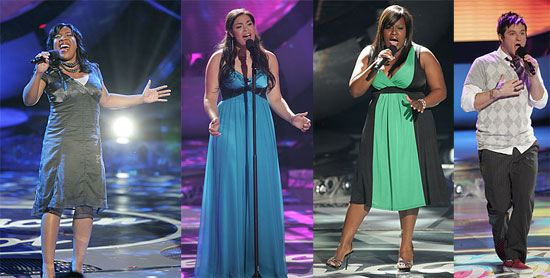 Let's just say it and get it out of the way. Last night's American Idol sucked. Sucked ass. I may be biased because I was rooting for Phil to make it at least a little further than he did, but I was also bored. Bored to death.
It was Bee Gee night, which should mean jive talking, staying alive and dancing. Exciting, right? Oh no. These Idol contestants must have been working out a patent on a new sleep aid - - The Bee Gees as delivered by the Top Four. Tragedy is putting it lightly. Holy cow, I don't think I've been in this much pain since I had a root canal.
My sympathies to Barry Gibb, who really wrote some classic songs and turned in some of the better disco music of that era. So why didn't the Fab Four choose any of it??
Inexplicably, each of the Fab Four, or should I say the Fab Bore, were given two song choices - - in other words, two opportunities each to make me want to drive a screwdriver into my ear canal to stop the torture. If I could muster up the energy brought on by extreme boredom in order to do so.
Melinda got the craptastic first slot, while Jordin got the pimp spot. Biased much, American Idol? I mean, really. What's the point of voting? It's patently obvious that you want Jordin to win the whole thing. Never mind the judges' constant tongue bathing of her, even after that shiteous butchering of Bon Jovi last week.
Melinda was great. As always. (Although her outfits gave baked hell new meaning) But apparently the judges got a memo about their desire for Jordin to take the top spot and so they weren't allowed to tongue bath Melinda. Melinda is so consistently good that now she gets a smackdown for that. Honestly, I wish that Melinda had gone out of her comfort zone again, as she did last week, and tried something that was genuinely disco and dance worthy. But she didn't. And neither did Jordin. Jordin stuck to ballads and went very pitchy during a performance of "Woman in Love" by Barbra Streisand. LaKisha gets called out on screaming and being screechy, but Jordin won't have to worry with her fan base and TPTB behind her.
LaKisha tried her hand at "Staying Alive" and jazzed it down. It wasn't terrible but the judges reacted as though she had just crapped on the stage. It's very obvious that they are ready for LaKisha to get the boot. I don't think anything she does is going to get her the kudos, not with Jordin at risk. LaKisha, LaKisha, LaKisha. Didn't you get the memo?
Blake busted out the beatboxing for both songs and while I didn't particularly like either one, I didn't hate it either. The judges were underwhelmed at both, Simon basically told Blake in his usual tactful way that his bleached ass and cute little argyle sweaters may be headed back home. Poor Blake looked miffed, after weeks of being praised for his beatboxing and being original. Blake, Blake, Blake. That was last week. This week Jordin is on the fast track and either you or LaKisha must go packing. Didn't you get the memo?
I think tonight's "big reveal" will be about as climatic as Tom Cruise coming out of the closet. Nobody but Melinda getting the boot would be a huge shocker. I think TPTB want a Melinda/Jordin showdown, although Melinda is so far out of everyone else's league it's laughable.
My prediction: Blake's teen fan club will save him and LaKisha will sign off tonight.
Future prediction: Next week, Blake will be served his papers, leaving a Melinda/Jordin sing out. With Jordin pitted against Melinda, her shortcomings will be evident.
But does anyone really care?
Posted by Lori Johnston at Wednesday, May 09, 2007