Are My Ears Defective? 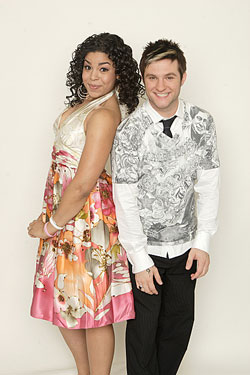 Image Courtesy of PopSugar
How else to explain the utter boredom over American Idol's almost season finale? How else to understand the inexplicability of the tongue bathing for Jordin? Was it just me or was she shrieky, gasping, breathy and, in general, underwhelming?
First things first, why oh why did Blake agree to go first and let Jordin get the pimp spot for like the thousandth time? I know that TPTB have already decided Jordin is going to win and the whole thing is probably rigged, but don't make it any easier, Blake!
So each singer gets three songs, blah, blah, blah. Blake chooses "You Give Love a Bad Name" for his first song, which is a great choice because it really showcased his beatboxing well. (My backup pick would have been "Time of the Season", which he also rocked earlier in the season). Honestly, I think Blake performed it better the first time. He seemed a little zapped of energy, but maybe he was nervous since they were in the Kodak Theater in Hollywood, after all. So Randy, extremely inexplicably dressed up as Michael Jackson doing Sgt. Pepper, tells Blake his beatboxing is awesome, but his singing pretty much sucks. Boo, Randy. Paula is obviously popping the Vicodin for her busted nose, as she is terribly effusive all over Blake and his beatboxing and his grandpa pants and hoodie. Yay, Paula, and wow, do you have big, long hair tonight. Rock those extensions, girlfriend. Simon tells Blake that he's a great performer and thought he did a good job. Yay, Simon. He even adds in a little bit about there really being talent in Seattle. Then Ryan jumps in to inform Blake and, oh, everyone else in America watching the show that Simon is a liar. Bitter much?
Now it's Jordin's turn and she comes out wearing some dress thing over jeans and in case we didn't know, SHE'S SEVENTEEN!! She sings some Christina Aguilera song that I don't know and don't care to know and despite the fact that Randy and Paula both think she's hot (with Paula making her usual nothing to do with anything commentary on how cute and adorable Jordin is - blech!), Simon tells her like it is. She's shrieky, she's screamy and Blake gets Round One. Go, Blake! Ryan comes out to give out Jordin's digits and Ryan must be either four feet tall or Jordin is seriously an Amazon woman of about seven feet tall. Holy crap.
Round Two. Blake is totally sporting an argyle sweater and matching shoes. Cool! He's chosen "She Will Be Loved" by Maroon 5. I actually like it. Despite Mr. P.S. saying that the higher notes don't do Blake any favors, I think it was a good choice for him. The judges, however, believe that Blake took a safe song and didn't do much with it. Is everyone drinking Paula's Kool Aid? Do the performances sound different live versus on air? Please.
So Jordin comes out, still rocking the dress thing over jeans (which really do her no favors, because let's be honest here - - girlfriend isn't a size 8) and she's going to torture us with another rendition of "Broken Wing". It's okay. I really don't understand Simon's complete about face and telling her that her version is better than the original. Simon had better check dark corners for Martina McBride, that's all I'm saying. And in case we didn't know, Jordin is ONLY SEVENTEEN!!
So Round Three comes up and both Blake and Jordin must sing the song that won the songwriting contest. It's pretty crappy. And definitely NOT Blake's type of song. Was he not allowed to beatbox it, or jazz it up? You know, this has got to be rigged. TPTB must have thought to make sure and pick a song that would be more ballad-y and easier for Jordin to handle, in the process, throwing Blake under the Idol bus. I think Blake knew it too.
I don't think Blake's performance was terrible, it certainly wasn't his best, but he didn't have the greatest material to work with. Jordin's performance was okay, but nothing to get super excited about. But she is ONLY SEVENTEEN!!
All in all, a weak finale. Was having the phone lines open for 4 hours really necessary? Are that many people voting? And why didn't TPTB think to choose Winger's "Seventeen" for their pop princess? It's perfect, since she is SEVENTEEN!! Oh yeah, that's right. Jordin can't sing rock for shit. Oh well, she is ONLY SEVENTEEN!!
Happy to see Chris R., Phil, Chris S., LaKisha and Melinda in the audience. See you guys tonight!!
Posted by Lori Johnston at Wednesday, May 23, 2007