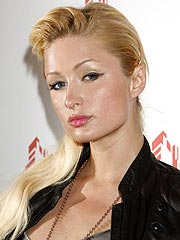 Because beautiful and exciting people shouldn't have to live by the same standards as the rest of us. Or so thinks Paris Hilton. Beyond the stunning revelation that the airheaded heiress actually thinks (I think the jury's still out on that one), unbelievably, Paris is asking that her 45 day jailhouse stint be pardoned because (and try not to laugh) she provides "beauty and excitement to (most of) our otherwise mundane lives." Still laughing? I know I am. Bitch, please. How is flashing your coochie to the photographs providing beauty and excitement? And my life isn't so mundane that seeing your private parts is going to spice it up. (But that won't keep me from writing about it, of course).
The Hilton Camp claims that they have over 900 signatures, protesting Paris' sentence. (Did the multitude of Paris pets have permission to sign this bogus petition?) They also claim that many other "celebrities" are "dismayed" at Paris being treated so unfairly. Not so with Tom Arnold. God bless him for making this statement: "I do think she should go to lockdown rehab – but not a nice one. I think it should be chosen by the judge. I've got some ideas – there's a place in Alabama that worked for Robert Downey Jr."
Ha! Paris in the pokey in Alabama! Priceless.
Seriously, if this bitch didn't have "Hilton" in her name, this wouldn't even be in debate. She violated her probation twice. After she struck a vehicle with her SUV in full view of paparazzi, and took off. What action did the State of California take then? Absolutely nothing.
Paris has been getting a free ride for a long time (actually since birth) and it's about damn time that she has to face the consequences of her actions. Throw her ass in jail. All 45 days.
If Schwarzenegger agrees to pardon this waste of space, or alleviate her full sentence in any way, I will lose all respect for him and rue the day I actually voted for him.
Posted by Lori Johnston at Tuesday, May 08, 2007