Has Idol Jumped the Shark? 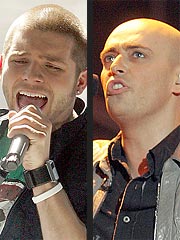 Last night's American Idol was far and away the most disappointing episode of the season. Never mind the annoying stretching-the-five-minutes-at-max results into an hour - -and without a group sing. Never mind the baffling "top of the R&B charts Robin Thicke" performance that wouldn't have gotten him through an Idol audition if his dad wasn't Alan Thicke. Never mind Bon Jovi singing some song I had never heard of, and not one of their classics. Never mind the constant bitchslapping that's going on between Ryan and Simon.
In giving Phil and Chris the boot on the same night, Idol has effectively ruined and destroyed any chance of a surprise boot a week or two down the line. Honestly, we all know that Melinda should win and we've all known this for a good six weeks, at minimum. But it seems that all the excitement left the building last night, along with Mr. Stacey and Mr. Richardson.
If the votes had been tabulated separately, would both these gentlemen be gone? LaKisha got raked over the coals last week and I think she might have been packing her bags, had that happened. Jordin gave her worst performance Tuesday night, and in my humble opinion, the worst performance since Antonella Barba was voted off. She deserved a pink slip for that horrendous rendition of a Bon Jovi classic. Phil, performing immediately before her, wiped the stage with her in comparison. While Phil started off very weakly, he really came on strong these last three weeks and I cannot agree that he deserved to go home for his energetic and passionate performances the last three weeks. Say what you will, the man can sing and maybe he showed it late in the game, but last week's and this week's performances should have guaranteed him a spot in the Top 4.
Chris didn't sound better nor worse than he has in previous weeks. The only singer who has improved overall in the last three weeks was Phil, who joined Chris in no man's land. If Chris sounded the same as he has at least since there was a Top 12, Melinda has stayed consistently awesome and no one else has generally improved, how did Chris get the boot? Chris definitely had the most vocal and shrieking teen girl infestation of any Idol contestant. With the booting of Sanjaya a few weeks back, I would assume that Sanjaya's fan base (shrieking teen and tween girls) would cluster to Chris - - maybe some to Blake. So how did Chris fall behind in votes, particularly behind struggling LaKisha and newly incompetent Jordin? And did Jordin simply have an off-week, as she claimed, or did we discover that perhaps she doesn't have nearly as much talent as we (and the judges) were giving her credit for? (BTW, Miss Jordin, anyone can have an off-week, but you do it this late in the competition and you should be toast)
This leaves Blake as the sole male candidate for the remainder of season 6. Does he deserve to be there? He is talented with the beat boxing. He has a great personality and he comes alive on stage (a problem both Phil and Chris had). But his voice isn't nearly as strong as Phil's. His appeal may not nearly be as wide or generic as Chris'. Does he fit The Powers That Be's criteria for an Idol? I don't think so. I also don't think LaKisha does either. And, surprisingly, nor does Melinda. That leaves Jordin, who Idol has been pushing for weeks.
I think we will come down to a finale between Melinda and Jordin. I think The Powers That Be dreamt this up weeks ago. I think they pimped Chris until last week, when they decided they no longer had use for him. I think they wanted Phil gone for the last three weeks and did their best to get rid of him by putting him in the craptastic first slot twice - - and I don't believe for a minute that Phil was a bottom vote getter. No way. He committed an Idol sin by opening up a can of whup-ass onstage and keeping himself around for longer than Idol wanted. Go, Phil! I hope you get signed to a country music label and go on to far greater success than the judges or Idol ever gave you credit for.
I have no worries for Chris. While he may not set the music world on fire, he has definite potential being a teen idol and maybe he'll guest on Supernatural or Heroes or get his own show.
I worry about the future for American Idol though. It seems many people have lost interest over this season and many people were disappointed with last night's show. While the presence of Sanjaya irritated some, he provided a welcome entertainment and lots of press. With him gone, and now with their best male vocalist (Phil) and teen dream (Chris) off the stage, where's the excitement? Where's the interest? I don't know, but I sense some shenanigans going on behind the scenes at Idol. For all their apparent manipulation to control who's going to be the next Idol, I can't see that the next 3 weeks is going to bring in 65-70 million votes. I, for one, will no longer be tying up the phone lines.

Gentlemen: thanks for the memories