The Thin Man (1934) is not only one of my favorite movies, but one of the best films to come out of Hollywood in the chock-full-of-classics 1930s.
Based on a novel by Dashiel Hammett, it stars the dashing and debonair William Powell as detective Nick Charles, and Myrna Loy as his devoted wife, Nora. The plot is your typical, somewhat recycled fare. A scientist goes missing and a series of murders happen, which are made to look like the scientist is committing. Nick is hired to find the scientist and find who the killer is. Nora and Asta, the couple's terrier, are along for the ride.

Source: homevideos.com
What makes this film so charming, so classic and a definite PS DVD pick, are the two leads. This was the film that introduced me to William Powell and it was the start of a cinematic love affair that has never waned. Mr. Powell was simply born to play Nick Charles, a witty, debonair classy gentlemen (which apparently Mr. Powell was in real life). Teaming him with Myrna Loy as his cinematic wife was pure genius. The two of them together have a chemistry that has not been matched since. Although it is nearly 20 minutes before either Powell or Loy enter the film, once they do you simply cannot tear yourself away. Just at the tail end of the Pre-Code era, The Thin Man abounds with witty repartee and razor sharp one liners. The script is honed to perfection, the director is flawless and the cinematography cannot be topped. 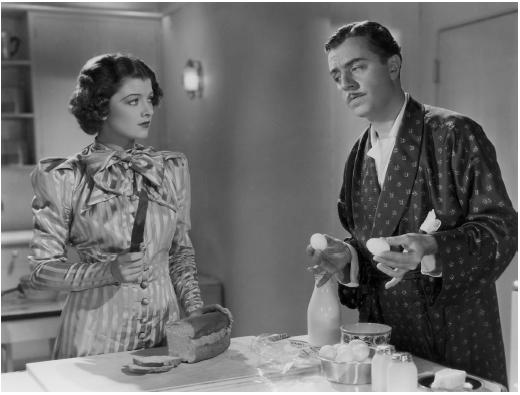 The King and Queen of Comedy
Photo Source: Yahoo
It's amazing to think that this film was shot in a minuscule 16 days! My only complaint is that the movie ends - - fortunately, sequels abound! Definitely recommended for repeat viewings and for your own personal movie library.