Why Do All Fake Relationships Get Their Start in Italy? 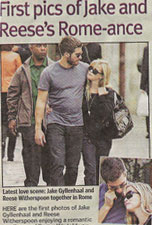 First, it was Tommy Boy showcasing his show pony (a/k/a Zombie Bride) to the world in Rome. He of the maniacal grin, she of the dead eyes. Ah, memories.
Now, Jakey G. and Reese are officially "outing" their relationsham to the public on their so-called Roman Holiday.
Whatever. This relationship is about as real as Posh's breasts. Fake, fake, fake.
Don't get me wrong - - I like Jakey G. He's a good actor, he seems fairly low key and I could care less what his preference is in his private life. But the studios do. The producers do. The investors do. And the teen girls and bored housewives do.
Reese and Jakey have a movie that just came out - - Rendition - - to less than stellar reviews. It barely made a ripple at the box office this weekend. Not exactly what the studio thought when the movie was getting advance publicity. With a mid to late October release date, this movie was obviously originally thought to be Oscar material. Not according to early reviews.
So what's a studio to do? Easy. Remember those rumors about Reese and Jakey supposedly seeing each other during the filming, with Reese comforting herself over her failed marriage on Jakey's strong shoulder? Recycle that story and get lots of positive buzz by proclaiming them a couple. Better yet, have the first official picture of them together as a couple, holding hands and "canoodling", in one of the most romantic of romantic cities, Rome. If people buy it, if they are interested in Reese and Jakey as a couple, surely they will run to the theater to see them in Rendition. Cha-ching!
So far, the plan seems to be working - - at least on those far less pessimistic than me. Handfuls of bloggers are already swooning and squealing about new couple Jakey and Reese. Delighted and thrilled over the "candid" pics of them holding hands and strolling through Rome, unable to see a PR coupe for what it is, and not smelling the Cruise-perfected stench from here.
People, please. Mark my words. As soon as Rendition has run its course and is leaving theaters, Reese and Jakey will "break up" but "remain the best of friends". It's only a matter of time.
Posted by Lori Johnston at Wednesday, October 24, 2007