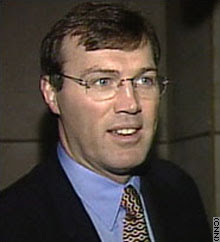 As the time draws nearer for publication of the Tommy Boy exposè, it's only expected that death threats would be leveled at journalist Andrew Morton, the man behind the book.
Morton told the Sunday Express "I have received threats from the Scientologists and things have become pretty heavy - to the extent that it's almost more than my lawyers can handle. I've sold my flat and I'm not telling anyone where I'm moving to. I intend to disappear for a while." Supposedly the reason for the renewed threats is that Andrew Morton's forthcoming book questions Little Lord Tommy Boy's relationship with Katie Holmes, his controversial beliefs and his sexuality. According to In Touch, Holmes is "petrified" about the revelations in the biography, which is expected to hit shelves next year.

This leads me to believe that the book will indeed be published in January, as we last heard. If anyone is keeping count, this book was allegedly due to be published last summer - - that's right, the summer of 2006. Unaccounted delays caused the book's publication to be pushed back and pushed back - - kinda like the TomKat wedding, wouldn't you say? But like the TomKat wedding, eventually D-Day will arrive.

Support Andrew Morton. Buy the book in January. Send a message to the Clams that the more they harass someone, the more the wog nation will support that person. After all, this is a man who went up against the British monarchy, for God's sake, and didn't get this type of harassment. Surely Little Lord Tommy Boy isn't more intimidating than the Queen of England?
Speaking of the Clams, how dumb are they, really? Don't they know how reverse psychology works? If they really don't want anyone reading Morton's book, the best course of action would be to ignore it. Not threaten and intimidate the writer, which gives credence to the book, whether it's truthful or not. Duh. Idiots.