The Bitch from Grey's Anatomy Gets Married 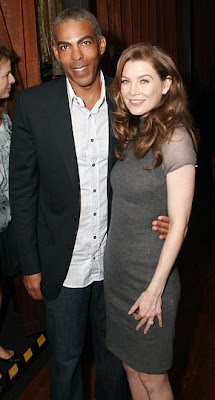 Photo Source: Crazy Days and Nights
Hmm, is that a bit too harsh? Well, Ellen Pompeo rubs me the wrong way and I think "bitch" is totally fitting.
Anyone see her on Punk'd? I watched a few episodes last year when Mr. Psychoticstate was TiVo-ing them and I happened to "luck" out and catch the episode with Ellen "I'm So Entitled" Pomp-ousAss-eo. Here is the set up. Her then-boyfriend Chris Ivery was going to take her out to lunch at one of those indoor/outdoor cafés that are so popular in Beverly Hills. Their server, who is an actor, was going to go overboard hitting on Mr. Ivery and Mr. Ivery was going to leave her a rude (as in huge) tip. Seems like it could work - - after all, no one was getting hurt and it wasn't like anyone was pretending to be from the IRS, claiming back taxes. So Chris and Bitch go to the café and the actor pretending to be a server who is probably really a server when she's not acting comes out, describes the daily specials and takes their order, all the while staring at Chris. The duo ordered an appetizer, which Bitch did not like - -she informs the server that she doesn't like it and once the server takes it away, she starts picking apart the server's appearance to her boyfriend. Then she gets angry that the server is showing her boyfriend attention and states that she's going to stab her with a fork. Nice, isn't she? The cherry on top of the cake is when Mr. Ivery gets the bill and leaves a $200 tip. Bitch blows her carefully coiffed stack and demands that Mr. Ivery tell the girl the tip was a mistake (after the girl came out to thank him and gushed over how she would be able to take a trip home to see her family now) and he meant to put $20, rather than $200.
Ellen Pomp-ousAss-eo does not seem like a nice person.
Anyhow, bitch got married in New York, at City Hall, on Friday. Do people still get married at City Hall? I thought that went out of fashion when World War II ended.
Best of luck to Mr. Ivery. He's going to need it. Can Ellen Pomp-ousAss-eo be that loaded?
Posted by Lori Johnston at Wednesday, November 14, 2007