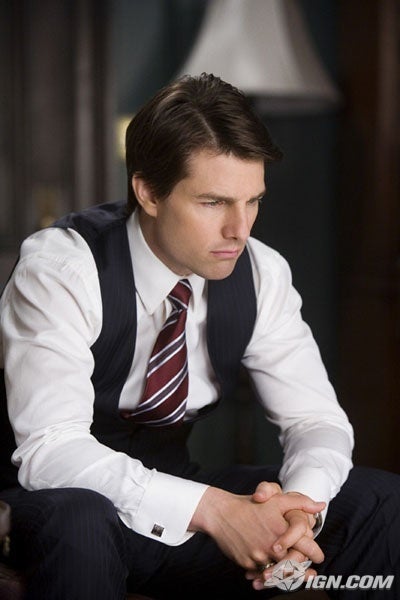 You just know Xenu isn't going to be happy about this.
Little Lord Tommy Boy's play for an Oscar, Lions for Lambs, opened this weekend not only to dismal reviews but to empty theaters. The political talkie garnered around $7 million its opening weekend, a disappointing figure, especially when you consider that Fred Claus managed to pull in over $18 million. That's right, Vince Vaughn in a Santa suit was more appealing to the average moviegoer than a preachy, political Tommy Boy. Hard to fathom, I know.
And don't expect Lions for Lambs to pick up either. Bee Movie is still out, and doing a killing - - and with the kids out of school next week, it will probably plump up its coffers. American Gangster also opened on Friday, and to excellent reviews. Plus, Gangster has the non-controversial, non-hyperactive and non-Scientologist Denzel Washington as its star. Any doubts? Look at the bottom line. Gangster cleaned up, to the tune of $80 mil.
Take that and put it in your niacin shake, Tommy.
There is some good news for the smallest Cruise, save Suri. Tommy Boy's performance is generally getting good reviews, from the people that went to see Lions. His scenes with Meryl Streep are reportedly strong. So will Tommy get his wish for a belated Christmas gift and get an Oscar nomination? Perhaps. He's gotten the nod before. Will he reign successful and leave with the little man (Oscar, that is)? Highly doubtful.