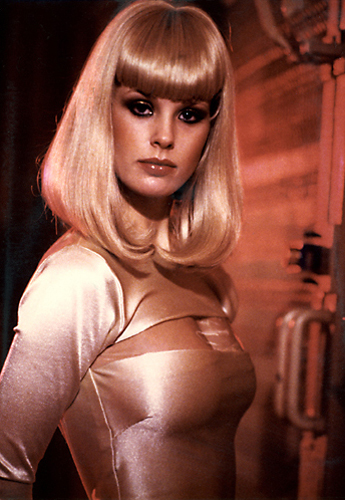 It's been bugging me for days and now I finally have it! Katie Holmes' new look - - it's Galaxina! Did anyone see that movie from 1980? No, neither did I. It's claim to infamy is more due to the fact that its star, Dorothy Stratten, was murdered after filming commenced. But check out Dorothy as Galaxina's straight, bang-y bob (although Dorothy's is a bit longer than the "fashionable" Ms. Holmes'). Check out that dazed, vacant look in Dorothy/Galaxina's eyes. Look familiar? Even better . . . Galaxina is a lifelike android! What a coinkydink. Per Wikipedia, Galaxina is assigned to oversee the operations of a deep sea freighter captained by incompetent Cornelius Butt. When a mission requires the ship's crew to be placed in suspended animation for decades, Galaxina finds herself alone for many years, developing emotions and falling in love with the ship's pilot, Thor, as he and the other crew sleep the years away.
Android, suspended animation, alone and sleeping the years away. It all says Katie Holmes to me! The developing emotions part is a little tricky, but I'm sure Katie can work on that one. And if Katie Holmes is Galaxina, then it's only natural that Little Lord Tommy Boy is Captain Butt. I'm getting chills at the similarities. Really.
This could be Katie's salvation. Even with Captain Butt's money she can't get cast in a movie to save her life. Here it is, Katie! Galaxina. This movie was literally made for you. Heck, you don't even need to show up on set. Just continue with your day to day existence and have a film crew handy. Viola! A new Katie Holmes picture! Everyone knows how much Hollywood loves a remake.
Katie Holmes as Galaxina. Loving it.
Posted by Lori Johnston at Monday, December 03, 2007