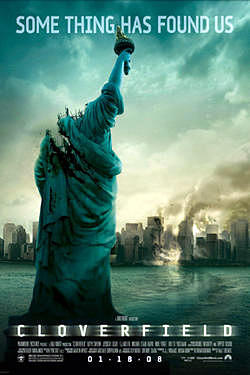 So this weekend was movie going weekend and options were somewhat limited. It was either 27 Dresses, which Mr. PS didn't really want to see, Cloverfield or some movie about people who get notified of their death via cell phone. Feeling as though that last movie was a ripoff of Final Destination, The Ring and a portion of my 20s, we went with Cloverfield. Oh yeah, and although the third Mrs. Cruise's "comeback" film opened this weekend, I think I would rather drive a rusty nail through my tongue slowly than suffer through the banality of Mad Money.
So on that note . . .
Cloverfield is an entertaining movie. It's no award winner, nor does it pose to be one. It's not highly original (filmed entirely from a camcorder's point of view and Blair Witch anyone?) and it starts off much too slow, in my opinion, for the War of the Worlds genre it's aiming at. However, once the action starts, the movie is chock full of action, destruction, unexplainable monster(s) and blood, until the crappy end - - but I jump ahead of myself. In case you have missed one of the 5,000 clever ads that have been everywhere, New York is being attacked. By what, it's unclear from the previews but the attacker has the nerve to knock the head off the Statue of Liberty. So we know that this unknown creature means business.
At the time of the first attack, a group of 20-somethings are having a farewell party for Rob, who is heading off to Japan on some job promotion. Rob is having a fine old time until Beth, his "true love", shows up with another guy. Rob and Beth had one night of grand old passion before Rob turned into a typical 20-something guy, got fearful of that scary thing called "feelings" and neglected to call her. So the angst is flying, as Rob pouts in his bedroom, Beth and her token guy leave the party, Rob's friend Hud filming all of this and more as a testiment to the party and suddenly there is a ferocious shaking, the power goes out briefly and New York assumes that they have been victimized by a California-esque earthquake. Naturally, that isn't the case, as skyscrapers begin coming down, eerily reminiscent of 9/11. The remainder of the movie follows Rob, his brother Jason, Jason's girlfriend Lily, Hud the wisecracking cameraman and Hud's crush Marlena as they attempt to get through the city, escape whatever is attacking Manhattan and reach Beth, who has called Rob on his cellphone for help.
Cloverfield isn't particularly intellectual and if you are picky, there are many problems. If your city was under siege, would you really take the time to film your mad dash to safety with your handy camcorder? And would you even think to bring along spare batteries, since not once does this super powerful camcorder give us a low battery sign, much less actually die. Would everyone really go along with Rob to rescue Beth, who sounds half dead in her message and mentions being injured, to a certain death? Could you really climb 52 flights of stairs while filming and keep up with your friends? And could your camcorder really survive being dropped, attacked, having rocks fall on it and, finally, a possible explosion?
But my biggest gripe with Cloverfield is the way the film never explains the attack. It doesn't shy away from showing the creature, the damage it does and the way it attacks people, but there is no real explanation for what it is, where it came from and even if the many tanks and weaponry of our military managed to take it out. I would assume that we did, but again, I also have to assume that Katie Holmes still has a fully functioning brain.
All in all, a good popcorn flick. Some genuinely jumpy moments and Hud the cameraman had the best lines in the film. The ending was a letdown from the previous 70 minutes or so of buildup but worth the price of a matinee.
Cloverfield, currently in theaters. Rated PG-13 for violence, terror and disturbing images.
Posted by Lori Johnston at Monday, January 21, 2008

Email ThisBlogThis!Share to TwitterShare to FacebookShare to Pinterest
Labels: Cloverfield