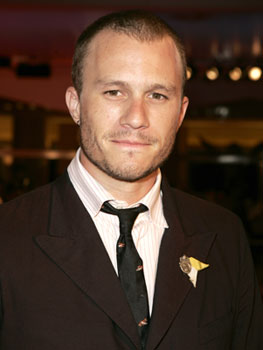 I'm slow getting on this story, but Heath Ledger's death was almost as shocking and certainly as sad as Princess Diana's and JFK, Jr's. Seriously, did anyone truly see this coming? We are treated to almost daily reports and media feeds about Britney Spears' long, painful and very public meltdown, but did anyone expect to hear news of Heath Ledger's death before Britney's? Or Lohan's?

Although the press saturation hasn't been as bad as it certainly could have been, when Heath's family finds out about his death via media reports, something is wrong. When one website has a live feed online, waiting for his body to be brought out of his home, something is wrong. When everyone and their grandmother is coming out of the woodwork to talk about Heath now, something is wrong. He was going to quit Hollywood. He was going to be the next Marlon Brando. He was cleaning himself up. He was a longtime drug abuser. He was happy in his life. He was depressed. Does it really matter? In the end, is it really that important how Heath appeared and looked, walking down the street in New York in the days prior to his death?

I think the most important facts are that he was a talented actor who certainly died much too soon, and he was a doting father who loved his daughter. My heart bleeds for her; at 2 years old, she won't have any concrete memories of her father. Hopefully her family will remind her how very much her father loved her. And hopefully one day she will grow up to see her father on film, to realize how much talent and potential he had and how very much he was admired and respected in his industry.