Can the Crazy Cruise Camp cut the crap now? Pictures like this are why we haven't seen Suri out and about with her crazy parental units recently. There is no way on earth this kid is preparing to turn 2. No way on Teegack either, for that matter.
Is Tommy Boy carrying her because she's taller than he is if he puts her down? And what's with the sweater thingy? Is he on his way to a PTA meeting for his older kids? Does he even remember he has older kids? And why is Suri in a party dress to go play in some sandbox? Is she even allowed to do that? I would imagine that sandbox is full of pesky thetans.
But let's get briefly serious for just a moment. I wholeheartedly believe without a doubt that this child was born before April 18, 2006. Months before. This is a fascinating timeline, done over at Pink is the New Blog, showing Katie from October of 2005 until January of 2006. How does this chick go from having no discernible belly on October 2 to looking 5 months pregnant on the day the pregnancy was announced on October 8? How does she look heavily pregnant on December 14 to having a fairly flat belly on December 17? I'm sensing some shenanigans. And don't think THE! BIGGEST! MOVIE! STAR! EVAH! TOMMYBOY CRUISE! can't pull something like this off. He played a sane, straight man for years, right? 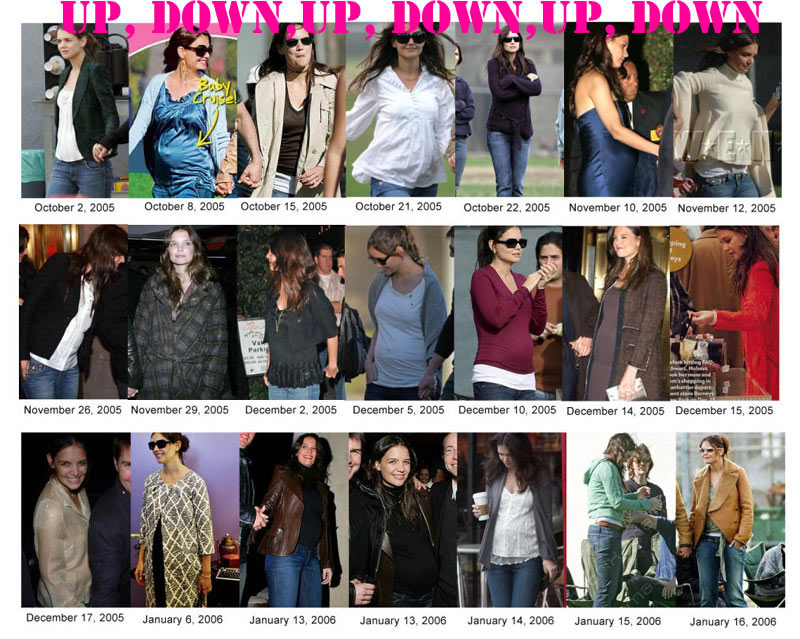 So I'm thinking that Suri silently entered the world in November or December 2005 - - making her more like 28-29 months old, rather than preparing to turn 24 months. And also making it highly doubtful that The Little General fertilized the old egg. Of course, this is my speculation only and I have absolutely no proof or facts to back it up - - but look at those pictures.
To quote Bill and Ted "Something strange is afoot at the Circle K."
Posted by Lori Johnston at Wednesday, April 02, 2008