In case you were worried, Kelly wants you to know that the Travoltas are totally normal 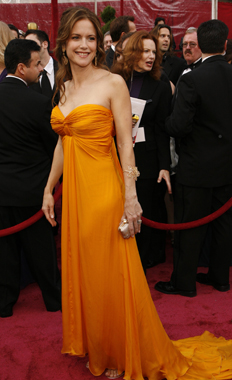 Of course, everything is relative, isn't it? Because what's normal to me isn't necessarily the same type of normal to people who own several homes, who have their own jets and runways.

With Tommy Cruise being in PR overdrive and that robot he's allegedly married to not allowed to speak in public, (and Leah Remini probably too busy changing her 4 year old's diapers) it's up to Mrs. JT to be the voice of Scientological reason.

According to Mrs. Travolta, who spoke to Extra, they don't live in L.A., they live in Florida. (No doubt in or around Clearwater, by those crazy ass Scieno headquarters). They have "got our kids, do a lot of very normal things there. We ride golf carts, swim, rollerblade…We try to keep the family together as much as humanly possible.” Extra goes so far as to claim the Travoltas live a low-key lifestyle. Once again, tomato, tomahto. Owning your own jet airplane (several of them) isn't exactly low-key to me but I get pretty thrilled over coupon clipping.

Some other choice tidbits from the 17-years married Mrs. Travolta:

The Jerry Maguire star admits to having quite the shopping obession. “I love Target! I’m telling you, they have so many great things,” she gushes. “Kirstie Alley’s one of my best friends [yet another Scieno nut] and we’ve gone in there and walked out with two shopping carts a piece. It’s crazy. It’s bad.”
Despite their low-key lifestyle in Florida [ha!], it’s no secret that Kelly’s still one half of a major Hollywood superstar couple. But the actress says when it comes to their careers, she and Travolta are on the same page.
“There’s no competition at all,” she says. “I married one of the biggest movie stars in the world. To even think about that would be silly. I’m so proud of him. He’s the greatest.”
So has their parents’ fame affected the couple’s kids, Ella and Jett? “They think it’s normal,” Kelly says. “They’ve grown up on sets. They’ve traveled with us all over the world shooting different locations. They’re very much used to it.”
Kelly says the acting bug has already bitten 8-year old daughter Ella. “Ella, Johnny and I just did a movie together that’ll be out next year called Old Dogs,” she explains. “We shot with Robin Williams. Had the best time.”
The actress says she’s not worried about her daughter being exposed to Hollywood’s negative influences because, “It’s all about choices. About instilling values…We don’t do drugs, I don’t drink. Johnny doesn’t really drink so she’s not around a lot of that, so I don’t think she’ll be as tempted to fall into that…She’s an amazing kid.
Preston, who is perhaps best known for her on-screen love scene in Jerry Maguire with good friend Tom Cruise, dishes on what it was like to shoot that scene.
“There’s always awkwardness!…But he’s a pro. I’m a pro. It was a completely closed set, very well written, shot fast,” she reveals.
Kelly defends her friend’s infamous couch jumping stunt on Oprah, saying, “To be honest, I felt sad that I live in a society where we can’t show pure joy if you’re excited. He’s passionate, so he showed some unbridled emotion. Good for him. It was just spun out of control.”

Wow. I guess all Scientologists are in Code Red right now because Tommy Boy is having a PR emergency! Code Red! Code Red! Man your stations! That means get People on the phone immediately. I hope Kelly doesn't get RFPd for contacting Extra instead.

Seriously, I guess celebrity Scientologists just cannot give an interview without mentioning Tommy Boy. He must be like the Golden God or something to them.

And what is it with these crazy Scienos and thinking their kids are "amazing"? Isn't it time to get a new word? The thesaurus is full of them.

And for all the praise she gives her husband, never once does Kelly say she loves him. Hmmmm. She also doesn't mention all the babymaking they will be trying for this summer - - as they did last summer. I guess that was because John had a movie to promote. This summer, it's all about Tommy Boy and saving his ass, so no one is allowed to try for more Scieno babies except him! Him and his turkey baster.

And all the talk about Ella - - where is Jett? Why the avoidance with Jett? Face the truth, people.

Oh, and Kelly . . . jumping on Oprah's couch, pumping your fist and screeching "yes!" aren't signs of pure joy. They are pure insanity.
Posted by Lori Johnston at Friday, May 09, 2008