The Harpers: Sympathy or Scorn? 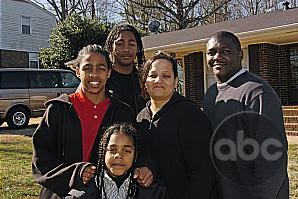 If you watch Extreme Makeover, you probably remember the Harper family. (I personally don't watch the show because it invariably turns all viewers into emotional mushpots.) They were one of the first families to be blessed with a new house on the ABC show. And not just a better, passable version of the split level they had. They were gifted with a built-from-the-ground-up 4 bedroom with decorative rock walls, four fireplaces, a solarium, music room and 3 car garage. Most definitely the largest and nicest home in their Clayton County, Georgia neighborhood.
As is the case with Extreme Makeover, all the materials and labor were donated - - roughly to the tune of about $450,000. Not exactly chump change. Further, the builders' (Beazer Homes) employees and company partners also raised $250,000 in contributions for the Harper family, including scholarships for the three Harper children and home maintenance fees.
This is where it gets sticky. Ma and Pa Harper used that gifted home as collateral on a loan to start a construction business. The business failed, they couldn't repay the loan and now the home is in foreclosure. Their neighbors, many of whom donated their time and energies to help in building the new house, are furious. The local mayor feels the Harpers squandered all the community's hard work and he's furious.
On the one hand, the community (and the show) would have every reason to be upset. These people were gifted with a mini-mansion, a much nicer house than they started with, and no mortgage payment on top of it. They were also gifted with money to help them with home maintenance and scholarships for their children. Sure, maybe Mr. Harper wanted to start his own business but did he need a loan for $450,000? And would it have been more responsible to perhaps get a job at one of the many construction companies in the Atlanta area, versus trying to start a new company from scratch? Would it have been more responsible to safeguard and protect their only asset (the house) and maybe work for others, and save up enough money to at least start small?
On the other hand, should the Harpers be faulted for trying to better themselves? Yes, Mr. Harper could have gotten a job at Wal-Mart or McDonald's but he had a dream of owning his own business. The house was theirs, to do with what they chose. They were not given any stipulations on it.
Like I said, it's a sticky situation. As much as I admire anyone wanting to start their own business and control their own destiny, so to speak, I have to feel that when the only asset you have is one given to you out of charity and donations, and it is your house - - where you live - - you really shouldn't risk it. The Harpers were given $250,000 for various expenses. Why not use that? It still would have been a large amount of money to start a business with - - nevermind $450,000. My best guess is that the Harpers didn't want a small business, they wanted an empire and wanted to play with the big boys. And I hate to say it, but when you don't work and sweat to get what you own, you don't take care of it and respect it in the same way.
Sad situation all around. Sad for the many people (1,800) who contributed in various forms to give the Harpers a better home. Sad for Extreme Makeover, who may have problems now getting people to donate when something like this leaves a bad taste in the general public's mouth. Sad for the Harper children, who I hope still have their college funds intact. Sad for Mr. and Mrs. Harper, who allowed greed and the supposed quick buck to destroy what security they had. After all, before Extreme Makeover, they may have had a rundown house, but they still had a house. Now they have nothing. 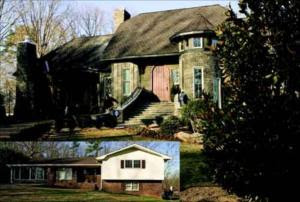 Email ThisBlogThis!Share to TwitterShare to FacebookShare to Pinterest
Labels: The Harpers; Extreme Makeover