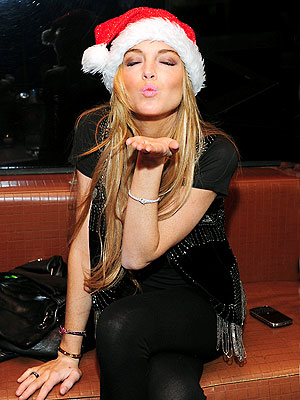 I read about this on other sites and I have to admit that I'm puzzled by it.

The claim is that Lindsay Lohan's $100+ leggings are selling out and merchants can't keep them in stock. I am confused by many things here.

First, is anyone besides Lohan still wearing leggings outside of the gym and yoga class? Secondly, who on earth would pay $100+ for a pair of leggings? I can go pick some up at Target for around $10 and who would know the difference? Is anyone going to know that you are wearing Lindsay Lohan leggings versus Mossimo or whatever other brand Target is carrying nowadays? Do the Lohan leggings come with a nail file to bust out of jail, or your very own roach? Because other than attaching a so-so drug addled actress' name to them I don't see how they can be vastly different from Target.

Which leads me to another point. Lohan decided that because she loved leggings so much she would design her own. Exactly what goes into designing a pair of leggings? Other than the fabric color and/or design they are pretty much the same. Okay, maybe Lohan made the call on whether or not they should cut off high on the calf or down by the ankle. But is that "designing" leggings? I know if you're Sheree Whitfield from Real Housewives of Atlanta that would qualify as being a designer but let's get real (ha, no pun intended).

Lohan as a designer is about as genius as the guy who invented the pet rock, and probably requires her to put just as much effort into it. On second thought, the dude who invented the pet rock is far more entrepreneurial than Lohan - - he convinced millions of people to fork over money for a rock with glued-on eyes. Without her infamous surname there is no way Lohan would be getting $100+ per pair of leggings, much less selling out.
Posted by Lori Johnston at Friday, December 12, 2008