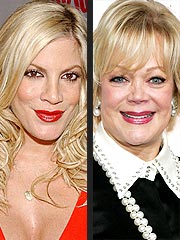 Source: People.com
It's not a surprise that Candy and Tori Spelling have an acrimonious relationship. It was well known before Tori wrote her book sTori Telling (a real hoot to read, by the way).
Now Candy has written her own memoirish book, Candy Land, and is doing the requisite promos for the book. It's only natural that she would be asked about her strained relationship with Tori but her response at a Massachusetts radio station yesterday is shocking.

"My daughter one day decided that she wasn't speaking to my husband, myself and my son, and that's how it's continued for the last, oh gosh, four or five years. And it was sad, that's what killed my husband, actually. He just didn't want to live after that. He [had] just done everything he could possibly do for
his daughter, and she wanted no part of him once he couldn't do anything for her."

That is cold. Even for an ice queen like Candy Spelling. Blaming your child, whether that child is a spoiled little twit or not, is reprehensible.
For the record, I like Tori Spelling. Her show So NoTORIous was one of the funniest self-parodies ever and it's really a shame it only lasted a season. Based on that show, along with her Tori & Dean reality show on Oxygen and her first book (haven't read the second), she seems like she'd be a real fun person to hang out with, go get mani/pedis with, etc. I hate how her first marriage ended and how she hooked up with Dean McDermott but Tori certainly doesn't have to answer to me.
But what on earth was Candy Spelling thinking? If she loves her daughter, wants a relationship with her, and with her own grandchildren, why would she ever voice such a hateful, vicious (and untrue) thing?
Tori has told People magazine “I love my mother. I’ve always loved her [and] no doubt she loves me. There’s no feud. We simply never meshed. My mother is who she is. I’ve become who I am. At some point I realized those two just didn’t go together.”
Sounds like at least in the maturity contest, Tori wins, hands down.
Posted by Lori Johnston at Friday, May 29, 2009