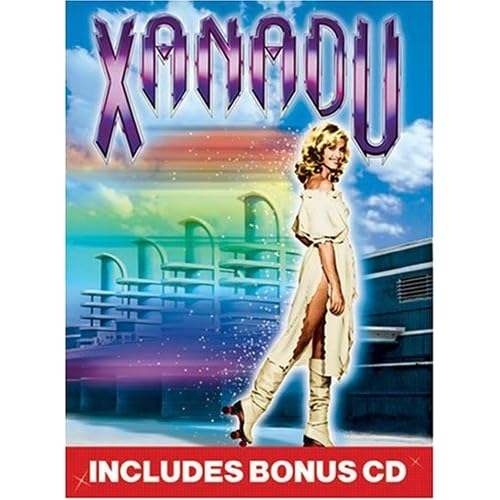 Xanadu is one of those rare movies that is so awful in every aspect, it's enjoyably good. Where to begin? The writing is awful, the dialogue is awful, the acting (with the exception of Gene Kelly) is awful, the costumes are awful. It's frightening to think that somewhere in L.A. in 1979-1980, there sat a film executive thinking "We'll take Olivia Newton-John, roller skating, ELO, the 1940s and the 1980s, mash it all together, make it into a musical and we'll have a hit!"
Xanadu is centered on Sonny, an artist who paints giant reproductions of album covers (they used to be hung outside of music stores back in the day). Sonny (played with unbelievable blandness by Michael Beck) is unhappy and wants to really do something with his creativity. Apparently his "woe-is-me" moment conjures up the mystical nine muses of Greek mythology - - they actually come to life on a painted mural in Venice Beach, to the snappy tune of ELO's "I'm Alive" -- but as soon as the tune is over, the ladies disperse to various parts of the globe, where apparently their divine intervention is needed. Only Kira (Olivia Newton-John) stays behind in L.A. to help Sonny become more than just an album painter. With the help of former bandleader Danny (Gene Kelly), Sonny plans to open a new nightclub in an abandoned Art Deco building - - by blending Danny's 1940s style and music with his own 1980s godawful designs, synthesizers and roller skates. Kira is on standby to look pretty, break into song when necessary and participate in the musical numbers.
This film has so many elements in it you wonder if either the film project changed hands many times before production, or the entire crew was on some sort of hallucinogenic drug. We understand why Kira is on roller skates almost every time you see her - - after all, it is 1980 and the height of the roller boogie fad. We understand, maybe, why Kira is attired in glam-peasant girl gear - - after all, she just popped off a wall. We understand, even, why Gene Kelly took this film role - - had to be money. But why on earth did the filmmakers find it necessary to demean Kelly with the terrible glitz-inspired fashion sequence toward the end, where he looks like nothing but an over-the-hill pimp? And why, if Kira was such an inspirational muse who apparently inspired Danny some thirty-five years before, could she not inspire Sonny/Michael Beck to inject some life into his role? What could have possibly made the director think that a cartoon/animated sequence in the middle of the film, with Kira and Sonny turned into various fish, made sense?
And yet, even as frightening as some of these images are, the film is strangely addictive and enjoyable. You cannot possibly watch Xanadu without tapping your foot or simply jumping up and dancing along to ELO's oh-so-early 80s tunes. You can't watch without smiling over how dorky everyone looked on roller skates back in 1980. You can't watch and not shake your head in amazement over the fact that Sonny and Danny's 1940s meets 1980s nightclub/rollerskating club will probably fail miserably and make them social outcasts in L.A. (not to mention, probably getting Kira fired from her job as a wall muse).
But, watch it you must - - if you are a fan of Olivia Newton-John, you will love seeing her at the height of her radiant beauty and listening to the catchy "Magic" and title "Xanadu" songs. For the classic film fan, this is Gene Kelly in his last film performance. The scene with him and Newton-John dancing together, and singing a 40s-era inspired song is sweet and a reminder to what a treasure he was to Hollywood. But the main reason to watch - - to see bad, bad cinema at its absolute finest. Highly recommended.
Posted by Lori Johnston at Wednesday, June 24, 2009