Source: popculturebuzz.com
Liz Smith of Variety is reporting (last month) that she has heard through the grapevine that Oliver Stone is gearing up for his next film and it's none other than Helter Skelter itself.

Helter Skelter has been produced as two separate "made for tv" movies, in 1976 and in 2004. The 1976 version, with Steve Railsback as Charles Manson, scared the daylights out of me. No offense to Jeremy Davies who portrayed Manson in the 2004 offering, but Railsback will make the hair on the back of your neck stand up, he's that chilling and that effective as Manson.
Stone was reportedly in talks with Manson family prosecutor Vincent Bugliosi, per Variety but other sources have stated that Bugliosi is in fact working on a project entitled Taming the Beast, based upon the book that chronicles Manson's life behind bars.
With the 40th anniversary of the horrible crimes approaching this summer, it seems natural for there to be talks of bringing the disturbing tale to the big screen and Stone, whose last few films have fallen short of expectations, seems a natural fit as a director. 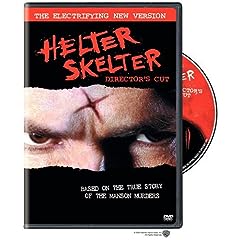