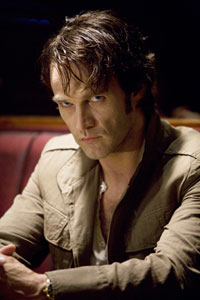 Thanks in part to the success of Stephenie Meyer's Twilight series and Charlaine Harris' Sookie Stackhouse series, vampires are a hot commodity right now.
New Moon, the Twilight sequel, is currently filming in Italy, with a November release date. Mark your calendars! I can't wait myself - - to see Edward Fucking Cullen/Robert Pattinson all sparkled and glittered out among the Volturi, squee!

HBO's True Blood (based on Harris' Sookie Stackhouse series) returns for season 2 on June 14 after being on hiatus since November or December. It's been a long, cold winter without True Blood and the hotness that is Bill Compton to bare his fangs and bring on his sex-ay. Anna Paquin (as Sookie) and Stephen Moyer (as Bill) may qualify as the Bella/Edward for the adults (although I still love Edward Fucking Cullen).
If you missed True Blood last year, do yourself a favor and rent, buy or borrow Season One - - it's all about the small town of Bon Temps, Louisiana and how vampires move among us, including former Civil War soldier turned vampire Bill Compton, waitress Sookie Stackhouse, her oversexed brother Jason Stackhouse, her grandmother Adele Stackhouse, her boss/friend Sam Merlotte, her best friend Tara, Tara's flamboyant and wild cousin Lafayette and her co-worker Arlene. As well as a handful of various vampires, some centuries old, looking to interact with humans. True Blood has a genuine Southern Gothic feel to it, so much so that you can practically feel the humidity and hear the clinking of the mason jars with sweet tea in them.
While Bella and Edward's love in Twilight remains chaste, there are no such boundaries for Sookie and Bill. True Blood is sexual, titillating, violent and shocking. Not a program for the kids but one solely for the adults.

The CW has moved its sinking ship Smallville to Friday nights and in its place is the new Vampire Diaries, based on the series of books by L. J. Smith. I have never read this series of books but according to the CW's website, Diaries is about student Elena Gilbert, who lives in Mystic Falls, Virginia and who becomes fascinated with new boy Stefan Salvatore who is - - you guessed it - - a centuries old vampire. (Why he's going to high school will no doubt be answered at some point) Stefan struggles to live peacefully among humans while his brother Damon embodies violence and brutality. And yes, both boys develop a thing for Elena.
Posted by Lori Johnston at Monday, June 01, 2009