Candy Spelling Is At It Again 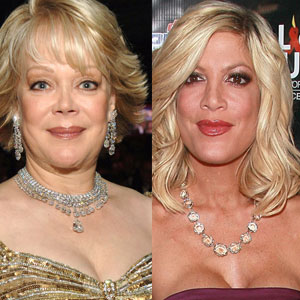 You know, you would think that Candy Spelling would just sit back in her 50-something room mansion and spend her days either happily ensconced in her doll room, or her gift wrapping room, or letter writing room, or watching reruns of Love Boat or Charlie's Angels or even spend a little down time counting all the money that Aaron left her.

Nope. Mrs. Spelling is back to air her dirty laundry with daughter Tori, yet again. This time she's sent an email (ostensibly from her computer room) to TMZ.

Candy's email includes addressing the actual email to "middle aged reality show stars (like my daughter)", and claiming that she didn't want to meet her granddaughter for the first time at a big party.

First, I think that Candy is behaving like a child. If she's upset with Tori, can't she call her up? Or did she misplace the phone somewhere in the Spelling Manor and can't find it? Seriously though - - sending an email to a gossip site? To complain about your child's behavior? Really?

I think this is definitely a case of the pot calling the kettle black. Or close to it. For Candy to slam Tori for using her children to move her career forward is disingenuous. I don't think for one moment that Candy had two children with Aaron because she wanted children so badly. I think it's more likely that Aaron wanted to have children and Candy wanted to remain Mrs. Spelling and so she took that bullet. Twice.

Calling Tori "middle aged" is quite funny, really. I wouldn't consider anyone in their 30s middle-aged. What does that make Candy exactly?

And I would want to know why Candy hasn't met her granddaughter yet. Let's say, for argument's sake, that Tori is being difficult and doesn't want to encourage any relationships between her mother and her children, despite what she's said in her books, on her reality show and in interviews. So why would Candy wait a year and then publicly speak out against her daughter, right before her daughter's reality show airs a two-part episode revolving around Stella's first birthday party and the fact that Candy, while invited, didn't show for the party?

I understand that Candy didn't want to participate in Tori and Dean's reality show. I understand she may have wanted to spend time with her granddaughter without cameras around. So don't sign the waiver and the show can't air your footage. It's as simple as that. Or come back the next day, when the camera crews are gone. Okay, you don't want to meet your granddaughter at a big party. What then? Wait until she graduates from high school?

I'm finding it very hard to defend Candy in any way. Stella turned a year old in June, I think. Candy and Tori live in the same city. What is the deal exactly? If Candy truly wants to meet her grandchild, and Tori is agreeable, then why hasn't this been done?
Posted by Lori Johnston at Tuesday, July 28, 2009