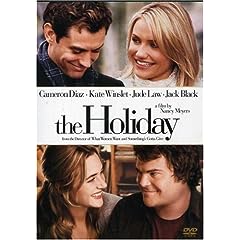 Due to a nasty summer cold, I couldn't sleep last night and found the t.v. on TBS and an airing of The Holiday. Now, I am not a fan of Cameron Diaz but I thought since I had seen the movie before, it would be the perfect thing to have on to (hopefully) doze off to. Turns out I ended up watching the whole thing.
As I've said before, I don't like Cameron Diaz. She reminds me of a hyperactive muppet that just got dragged out of the dryer. I don't understand her appeal and word on the street is that she gets highly offended when asked for an autograph. Yes, those same people that pay good money to go and see her movies who would like her signature instead get a lecture on how demeaning it is to ask for autographs and what a burden it is to Ms. Diaz. Attitudes like that piss me off. I'm not saying she shouldn't be able to enjoy a private life but being a public figure comes with some responsibilities and some inconveniences (as well as some perks, as Cameron can attest when she goes on vacation several times a year).
Anyhow . . . despite the fact that Cameron Diaz makes me want to tear my eyelashes out one by one, I liked her in this movie and I loved the movie itself. I know it helps that her character was a likeable, relatable type and Kate Winslet, whom I adore, also stars in this movie.
Diaz is Amanda Woods, owner of a film trailer company is L.A., who is breaking up with her cheating boyfriend. Winslet is Iris, a London-based journalist who is devastated to find out that her former boyfriend (also a co-worker) is recently engaged to another co-worker. Both women find a house exchange website and decide to switch residences for two weeks over the Christmas holiday, with Amanda going to Iris' small Surrey countryside cottage and Iris moving in to Amanda's spacious Sunset Boulevard digs. Amanda meets Iris' brother Graham (Jude Law) and promptly falls for him. Iris, meanwhile, meets Amanda's co-worker Miles (Jack Black), and hits it off, as well as Amanda's neighbor, Arthur Abbott, who was once a screenwriter during the Golden Era of Hollywood. Some of the best parts of The Holiday involve the character of Arthur, who is played by real life Hollywood scion Eli Wallach. His puzzlement and fear over the changing neighborhood, as well as his feeling that Hollywood has forgotten him, is particularly touching - - as is his continued devotion to his late wife. His chemistry with Winslet is beautiful. I'm not a particular fan of Jude Law but his portrayal of the excessively teary, emotional Graham - - in direct contradiction to the emotionally stunted Amanda - - is a nice change and well done. Black plays his usual effervescent, likable self although toned down a bit for this movie.
All in all, The Holiday is definitely a chick flick but one that can transcend genders and allow the guys to enjoy this one as well.
Posted by Lori Johnston at Sunday, July 12, 2009