There is Reasoning in Nature 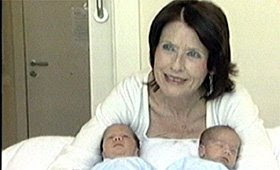 Source: CDAN
As wonderful as science and technology are, maybe there are some areas that are better left up to nature, God or whatever you believe.
Maria Bousada died this week at the age of 69. Now you may be wondering who she is and what the big deal is, since 69 isn't super young or terribly old. Maria Bousada held the record for a short while when, at 66 years old, she gave birth to twins. So that means that Ms. Bousada left two toddlers behind - - two toddlers who not only won't be brought up by their mother, but who probably won't remember her either. And to make matters even better, Ms. Bousada wasn't married. So no father to step in.
Ms. Bousada had her children as a result of in vitro fertilization that was done at the Pacific Fertility Center in California. She had claimed that she told the Center she was 55 years old (their cut off for in vitro) and they apparently took her word for it, not asking for any proof. They just took the $59,000 she forked over (from the sale of her house) and got the lab ready.
Look, I'm all for people doing what makes them happy and many people feel that being a parent is a calling for them. But if you're 65 or 66 years old, maybe being a parent wasn't for you. Maybe you should get a dog or cat instead. Or how about the Big Brother or Big Sister program? Even taking in an older foster child, because older children are so much harder to place. But bringing one child, much less two, into the world when the odds are greater that you may not be around for their high school graduation seems selfish and cruel. Ms. Bousada's mother may have lived to be 101 years old, but Ms. Bousada didn't even have a house to leave her children. Is that fair to them? And is it fair to Ms. Bousada's brother to now have the legal, financial and emotional responsibilities for raising two very young children? These children aren't teens -- they aren't even half grown. They are still toddlers, very dependent and having a lot of growing still to do.
Again, it's not my place to decide what makes other people happy and fulfilled but maybe one person's (short-term, as it turned out) happiness isn't worth two children growing up without even memories of their mother.
Posted by Lori Johnston at Wednesday, July 15, 2009