Review: He Who Sings Last by Lisa Laird DiRosso 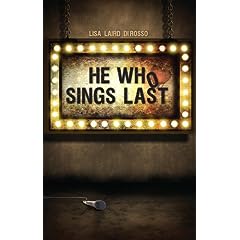 Description: Jimmy Covelli is a has-been celebrity who used to front a popular band in the 80s. He leads a quiet, post-fame existence until some ghosts from his past come back to haunt him after nineteen years, when an unsolved murder case is reopened by a zealous New York detective. Covelli charms and harms wherever he goes, and in his destructive path, he leaves behind a host of resentful family members and brokenhearted fans. Will the detective catch him and be able to prove his guilt?


He Who Sings Last is Lisa Laird DiRosso's debut novel and the plotline in general is a winner. A washed up singer, a pathologically jealous younger brother, a fan who has been obsessed for two decades and a hardnosed detective who has been chasing a killer for more than 20 years. This foursome is literary gold from this reader's perspective.

However, Ms. Laird DiRosso added a plethora of other characters that, in my opinion, were generally unnecessary and distracted from the overall story. At times I felt a bit confused by the changing cast. And leading into perhaps my biggest criticism of the book . . . other than the lead detective and perhaps Jimmy Covelli, I felt the characters had not been adequately fleshed out. Without giving away too much of the plot, I would have liked to have further insight into Jimmy Covelli's background and his fractured relationship with his brother. I would also have appreciated a bit slower pace and more character development between the obsessive fan and another character early in the story.

Fortunately, such attention was paid to the character of John Vintoni, the tenacious detective who has been anxious to solve a homicide for years. I believe Vintoni to be the best part of the book - - a likable, relatable character you can empathize with and someone you want to succeed and get his man or woman.

The ending of He Who Sings Last will charm some and put off others. It clearly seems as though at least some of the characters will be returning. Here's hoping that John Vintoni will become a staple in Ms. Laird-DiRosso's future writings.

He Who Sings Last is available at major booksellers now, including Barnes & Noble and Amazon.

Email ThisBlogThis!Share to TwitterShare to FacebookShare to Pinterest
Labels: Lisa Laird DiRosso; He Who Sings Last

Not really my kind of read but you have a wonderful review here!

I'm not sure if I'm going to read this either it looks good, but it looks meh too :P perhaps I'll give it a try. Great review though!