Review of Jane Austen Ruined My Life by Beth Pattillo 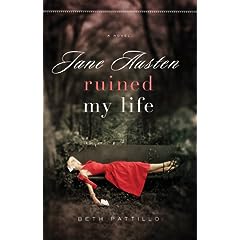 Synopsis:  Emma Grant, the heroine of Pattillo’s first outing, has a major beef to settle with her literary heroine, Jane Austen. Austen’s novels taught Emma, a college professor, to believe in happy endings, but her own happy ending goes up in flames when she discovers her husband, Edward, in the arms of her teaching assistant, after which the two have her professionally discredited by claiming she plagiarized a paper. Disillusioned and disgraced, Emma flees the U.S. for her cousin’s house in England after being contacted by Gwendolyn Parrot, an elderly woman claiming to be in possession of a stash of lost Austen letters. Rather than simply handing over the letters, Mrs. Parrot sends Emma on a succession of tasks that gradually reveal a secret about Austen’s life previously unknown to scholars. Along the way, Emma reconnects with Adam, her former best friend whom she fell out of touch with after marrying Edward.
(from Booklist)

When I picked up this book at The Mother Ship (also known as Barnes & Noble), I had no idea that this was our heroine, Emma Grant's second literary appearance.  As a reader, you should have no fear that you need to read Ms. Pattillo's first book featuring Emma before this one.  I did not and I still found Jane Austen Ruined My Life to be a delightful, witty romp through England.

I loved the setting - - I have always wanted to travel to England and having yet to get there, I savor any books that take place in that lovely foreign land.  Ms. Pattillo, who states in her bio that she travels annually to Britain, describes even the most everyday highlights of British living, from the local Starbucks to riding the tube to jaunts to the local bookstore.  Even having never been to London or the surrounding areas, I could picture each location almost clearly in my mind from the narrative.

I could also relate to Emma.  She realizes too late that she was married to a man who was controlling and didn't cherish her.  She changed her life to suit him and his and it took something as cruel as catching him the act of adultery for her to make an official break.  She is scarred and she is bitter about relationships but she isn't a bitter person.  I could also understand her passion about finding potential secret letters written by Jane Austen and her one-minded drive in her hunt.

The only thing I didn't like about Emma was her apparent blindness when it comes to Adam, her friend from college days whom she hasn't spoken to or seen since marrying Edward and who she runs into again upon arriving in London.  It's painfully obvious, to this reader at least, that Adam has long held a torch for Emma and it was no coincidence that Emma and Adam's friendship was broken when she married Edward.

Adam is a wonderful leading man - - thoughtful, generous and literate.  Throughout much of the book I rooted for Emma to come to her senses and throw herself into Adam's arms - - in between rooting for Emma to find those Austen letters and reveal some tantalizing aspect of Ms. Austen's life.

Jane Austen too is a central character of this smart piece of chick lit - - her name isn't just used to sell the book.  There are no flashbacks but much of Jane is revealed, fictionally, through papers.

In all, I found Jane Austen Ruined My Life to be a fun, intelligent read and a wonderful way to spend some  quiet afternoons.  The ending was not at all what I expected and some readers may find the ending questionable and objectionable.  While it might have been a bit of a letdown, it didn't ruin the spirit of the book for me.

If you're a fan of clever chick lit and/or Jane Austen, I recommend you pick up this book.

This sounds really intriguing! I'm adding it to my list.

I have had this on my TBR list for forever. I can't wait to read it. Great great great review!

Nice review; I'll have to check it out.

I will have to add this to my wish list.

I will have to add this to my wish list.

Sorry, but since I have a Y chromosome I see Jane Austen and flee! By the by we've got an award for you here!

I love Jane Austen. I'm so glad to see that she is gettin so much attention in new and great books! Thanks for the review!

I enjoyed this book greatly and recommend it highly. You mention that heroine Emma Grant had appeared in another novel, but do not list the title of the book. Could you share? I would love to read it.

This sounds a nicely different take. I'm sure I'd like it. Nice review.

I am so pleased that my review has given this little book some attention and put it on a few TBR lists! It is definitely worth it - - although Jake with his Y chromosome may not agree! (thanks for the award, BTW - - I always appreciate you guys thinking of me!)

LaurelAnn, Booklist had mentioned in their synopsis that this was the second literary outing for Emma Grant; however, in searching thru Ms. Pattillo's previous books I cannot find one with Emma as a character. I am stumped. If anyone can help with this, please jump in and shine some light on this mystery!

Glad to hear more about this book. I saw it at Costco and debated about getting it.

I really want to try this one it sounds so good! I really love this cover, too! Awesome review!

This book has been on my wishlist for a very long time! After reading this wonderful review, I am excited to read it! A lot of my friends only thought it okay (they gave it 3 out of 5 stars). But I'm usually very easy to please!

Hi. I'm a new follower and I love Jane Austen. I am adding this to my TBR. Thanks.
http://mylife-in-stories.blogspot.com