Review of "Over the Holidays" by Sandra Harper 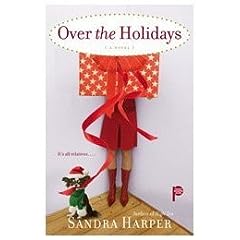 
The best holiday traditions are meant to be broken.


It's only December 1, and Vanessa Clayton has been dreading Christmas since she spotted tinseled trees at her local mall in September. Thankfully, she and her husband, JT, can't afford to drag their twin boys across the country to New England for the annual celebration at her stuffy sister-in-law Patience's home. Not that Vanessa has prepared a proper Christmas for her family in years, and she has less time than ever since she agreed to consult on the script of a local play. Her older sister, Thea, is no help -- she'd rather make art and flirt with surfers than babysit her nine-year-old nephews. Then Patience drops a holiday stress bomb: Her family will come to California instead.


In between "baking" cinnamon rolls for the school potluck and overbearing Patience testing her patience, Vanessa can't stop thinking about the difficult but charming playwright at work. Meanwhile, Patience's teenage daughter, Libby, obsesses over a college boy she has met by the pool, and Thea searches desperately for the meaning of Christmas -- for her latest installation, of course. As their holiday plans go comically awry, these four women discover the true spirit of the season is hidden in every festive surprise.

I am a Christmas fanatic and the thought of merging chick lit with a Christmas setting was an appealing one. I found Over the Holidays to be a fun read, as light and fluffy as cotton candy with a peppermint twist. I could relate to the main character, Vanessa, insofar as her desire to give her family a traditional, old-fashioned Christmas but running into the reality of job stress, energetic children, a husband unable to help and the very best of intentions going awry.

If you read author Sandra Harper’s guest post last week, you will recognize that all three holiday archetypes Ms. Harper discussed are present in Over the Holidays - - the Norman Rockwell-esque traditionalist and perfectionist Patience, the Hannah of Good Intentions Vanessa and the Rebel Without a Claus Thea. Patience cannot imagine a Christmas without cold temperatures, snow, a beautifully decorated house that would make Martha Stewart weep and homemade cooking from scratch. Vanessa wishes she could be like Patience, while at the same time resenting Patience’s perfection at all things domestic. Thea believes Christmas has turned into more of a showcase of greed and time of depression than a true celebration and wishes to set an example. Add in Vanessa’s husband JT, who gets an out of town job during the holidays, Patience’s husband Richard, who doesn’t want to rock the boat but finds playing golf in January appealing, Vanessa and JT’s twin 9 year old sons who have more energy than they know what to do with, Patience and Richard’s seventeen year old daughter, Libby, who is desperate to escape from the confines of their Wenham, Massachusetts home and Neil, a moody playwright who resents Vanessa’s help with his play but comes to need her.

As much as I could generally relate to Vanessa, I also had some issues with her. At times, she was downright abrasive and rude to Patience. While I could understand the frustration of having a “perfect” sister-in-law, I began to sympathize with Patience and get irritated with Vanessa. There was also a time or two during the story that I wished Vanessa wouldn’t give in to her children as much and be a little more of a disciplinarian.

However, these are relatively minor gripes when taking the book as a whole. I felt drawn into the story from the first page and the characters were well fleshed out. Whatever your thoughts on the holiday season - - love it, dread it, tolerate it or are indifferent to it - - you can find something to relate to here. Not each individual storyline resolved itself as I thought it might, which left me guessing to a degree and provided me with a pleasant surprise instead of a shrug and sigh.

If you enjoy chick lit, if you have strong feelings about the holidays or just want some light, entertaining reading, you simply can’t go wrong with Over the Holidays.


Over the Holidays is currently for sale at all major booksellers, including Amazon and Barnes and Noble.  Author Sandra Harper's website can be found here.

Email ThisBlogThis!Share to TwitterShare to FacebookShare to Pinterest
Labels: Over the Holidays; Book Review

If for no other reason, I want to read this because of your description of it as "as light and fluffy as cotton candy with a peppermint twist". Sounds soooo good!! lol! But in all seriousness, this book does sound really good!

I do like a good chick lit to break things up and one that is "cotton candy with a peppermint twist" sounds like just the thing!

Fab review. I love this cover.

Great review. Thanks. Your reviews are always so helpful.

This sounds like such a fun read. And yes, perfect for the holidays. :)

Just wanted to personally invite you to join in on my 50th follower giveaway! :]

Jenny and Lisa -
I'm a little bit fanatical about Christmas and the holiday season, which may explain my description of cotton candy with a peppermint twist. He he. If you pick the book up, I hope you enjoy it as much as I did.

Juju - I love the cover too. I'm really liking a lot of these covers coming out for the softback books that, well, cut the heads off the models.

Sheila - thanks so much for the wonderful words! I'm so glad that my reviews can be helpful, particularly when there are so many great reviewers around the blogosphere right now.

Jessica - I love Christmas too! Best holiday! And thanks for the congrats, I'm really looking forward to Shutter Island (the book and the movie!)

Andrea - - thank you so much for the invite! I am headed to your blog right now to check it out. :)