I certainly did keep the postman and UPS truck busy this week.  Here is what I received: 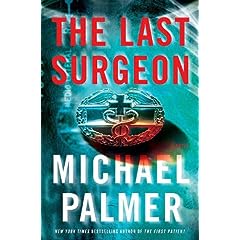 The Last Surgeon by Michael Palmer


Michael Palmer’s latest novel pits a flawed doctor against a ruthless psychopath, who has made murder his art form. Dr. Nick Garrity, a vet suffering from PTSD—post traumatic stress disorder—spends his days and nights dispensing medical treatment from a mobile clinic to the homeless and disenfranchised in D.C. and Baltimore. In addition, he is constantly on the lookout for his war buddy Umberto Vasquez, who was plucked from the streets by the military four years ago for a secret mission and has not been seen since.


Psych nurse Gillian Coates wants to find her sister’s killer. She does not believe that Belle Coates, an ICU nurse, took her own life, even though every bit of evidence indicates that she did—every bit save one. Belle has left Gillian a subtle clue that connects her with Nick Garrity.


Together, Nick and Gillian determine that one-by-one, each of those in the operating room for a fatally botched case is dying. Their discoveries pit them against genius Franz Koller--the highly-paid master of the “non-kill”—the art of murder that does not look like murder. As Doctor and nurse move closer to finding the terrifying secret behind these killings, Koller has been given a new directive: his mission will not be complete until Gillian Coates and Garrity, the last surgeon, are dead.

Lucy Valentine is as smart as can be, as single as you can get, and so not qualified to run a matchmaking service. But when her parents temporarily step down from the family business, Valentine, Inc., it’s Lucy’s turn to step up and help out—in the name of love.

Plus, her rent is due.


Here’s the problem: Lucy doesn’t have the knack for matchmaking. According to family legend, every Valentine has been blessed by Cupid with the ability to read “auras” and pair up perfect couples. But not Lucy. Her skills were zapped away years ago in an electrical surge, and now all she can do is find lost objects. What good is that in the matchmaking world? You’d be surprised. In a city like Boston, everyone’s looking for something. So when Lucy locates a missing wedding ring—on a dead body—she asks the sexy private eye who lives upstairs to help her solve the perfect crime. And who knows? Maybe she’ll find the perfect love while she’s at it…

Books I received as gifts:

When George Reeves, who had achieved international fame by playing Superman for five years on TV, was found dead by gunshot in 1959, the death was officially recorded as a suicide. According to Kashner and Schoenberger (A Talent for Genius), however, unanswered details about Reeves's demise shroud what in truth was foul play. In this page-turning hybrid of bio and murder mystery, the authors entertainingly pick at the loose ends and point their pens at a killer. Reeves, they show, was hardly as wholesome as his TV image implied. His life was filled with hard-drinking men, manipulative women, mafiosos and a career that plummeted like a comet after The Adventures of Superman went off the air. The authors set down this B movie-style tale with hard-boiled relish. They introduce archetypal sleazebag characters with an entertaining terseness?"Eddie was a tough guy with a heart of tungsten"; "Leonore Lemmon wore the reddest lipstick in New York"?that occasionally veers into cheap Hammett imitations. The well-articulated backdrop of low-budget TV production only enhances the cheesy milieu, however. By laying out Reeves's life before solving the mystery of his death, the authors present the equivalent of a crisp black-and-white TV docudrama, and manage to evoke all the irresistibly creepy nostalgia of a bygone era. Photos not seen by PW.

Holidays on Ice by David Sedaris

Holidays on Ice is a collection of holiday-themed fictional stories and personal essays written by David Sedaris, the best-selling humorist. Holidays on Ice was one of Sedaris' first works when originally published, and it's been re-released with the addition of a few passages, most of which have been previously published elsewhere. Even if you've read it before, Holidays on Ice is laugh out loud funny, and die-hard Sedaris fans need to spend their holidays reading this collection

The Best Day of Someone Else's Life by Kerry Reichs

Despite being cursed with a boy's name, Kevin "Vi" Connelly is seriously female and a committed romantic. The affliction hit at the tender age of six when she was handed a basket of flower petals and ensnared by the "marry-tale." The thrill, the attention, the big white dress—it's the Best Day of Your Life, and it's seriously addictive. But at twenty-seven, with a closetful of pricey bridesmaid dresses she'll never wear again, a trunkful of embarrassing memories, and an empty bank account from paying for it all, the illusion of matrimony as the Answer to Everything begins to fray. As her friends' choices don't provide answers, and her family confuses her more, Vi faces off against her eminently untrustworthy boyfriend and the veracity of the BDOYL.

Eleven weddings in eighteen months would send any sane woman either over the edge or scurrying for the altar. But as reality separates from illusion, Vi learns that letting go of someone else's story to write your own may be harder than buying the myth, but just might help her make the right choices for herself.

The Man Who Loved Jane Austen by Sally Smith O'Rourke

New York artist Eliza Knight stumbles across an antique dressing table that includes the added bonus of secreted letters, apparently between Jane Austen and a real-life Mr. Darcy. Caught up in her romantic notions about Austen's Pride and Prejudice and the possibility that Darcy may have been more than Austen's invention, Eliza enlists the aid of an eccentric researcher as well as a handsome and mysterious Virginia horse breeder, Fitzwilliam Darcy. Three years earlier, on a horse-buying junket to England, Darcy had a life-altering experience that makes him now anxious to buy the one letter written by Austen before it goes to auction at Sotheby's. For Eliza, the letter represents a possible fortune; for Darcy, it represents possibly requited love. O'Rourke alternates between the past and the present in this fascinating novel that pays tribute to Jane Austen's enduring ideals of romantic love..

Murder is Binding by Lorna Barrett

Stoneham, N.H., the picturesque setting of the pseudonymous Barrett's charming first in a new series, boasts a newly renovated main street devoted to a variety of bookstores. When Tricia Miles—mystery bookstore proprietor and city refugee—discovers her unpleasant cookbook store neighbor stabbed to death and a rare book missing, Tricia soon finds herself under the sheriff's surveillance and dubbed the village jinx. Determined to clear her name and track down the stolen cookbook, Tricia enlists a few friendly locals to aid in her investigation. When her difficult older sister, Angelica, arrives unexpectedly, Tricia worries she's in for another headache, but Angelica turns out to be a willing conspirator in Tricia's search for answers. The mix of books, cooking and an engaging whodunit will leave cozy fans eager for the next installment 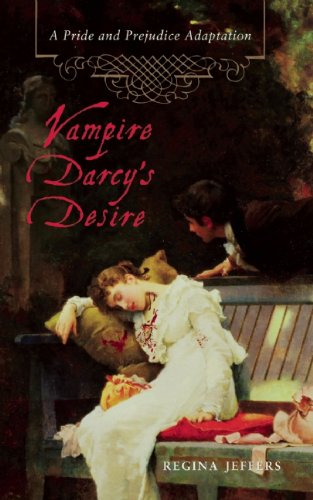 Vampire Darcy's Desire takes the greatest literary romance of all time and reinvents it around the hottest publishing genre--vampire romance. No story lends itself better to adaptation. Two lovers trying to overcome that which separates them: their pride, their prejudice, Darcy's vampirism and the evil workings of master vampire George Wickham.

According to Jane by Marilyn Brant

It begins one day in sophomore English class, just as Ellie Barnett's teacher is assigning Jane Austen's "Pride and Prejudice". From nowhere comes a quiet 'tsk' of displeasure. The target: Sam Blaine, the cute bad boy who's teasing Ellie mercilessly, just as he has since kindergarten. Entirely unbidden, as Jane might say, the author's ghost has taken up residence in Ellie's mind, and seems determined to stay there. Jane's wise and witty advice guides Ellie through the hell of adolescence and beyond, serving as the voice she trusts, usually far more than her own. Years and boyfriends come and go - sometimes a little too quickly, sometimes not nearly fast enough. But Jane's counsel is constant, and on the subject of Sam, quite insistent. Stay away, Jane demands. He is your Mr. Wickham. Still, everyone has something to learn about love - perhaps even Jane herself. And lately, the voice in Ellie's head is being drowned out by another, urging her to look beyond everything she thought she knew and seek out her very own, very unexpected, happy ending.


So what books came into your house last week?

Love the Jane Austen books you bought! I haven't read any of those myself so I am anxious to hear your thoughts about them!

Have a Happy Monday!

PS: I have an award for your over at my blog http://janeaustenreviews.blogspot.com/

Passages to the Past said...

O wow. You have some really cute ones.