Here is my stash from last week:
Sent by the publisher:

On the surface, Lena Spencer appears to have it all. She and her wealthy husband Randall have two wonderful children, and they live a life of luxury. In reality, however, Lena finds that happiness is elusive. Randall is emotionally distant, her son has developed a drug habit, and her daughter is disgusted by her mother's "overbearing behavior." When Randall decides that he's had enough of marriage counseling, he offers his wife an ultimatum: "Be grateful for all I've done for you or leave." Lena, realizing that money can't solve her problems and that her husband is no longer the man she married, decides to choose the latter. Drawing strength from Tina Turner's life story, SEARCHING FOR TINA TURNER is Lena's struggle to find herself after 25 years of being a wife and mother. 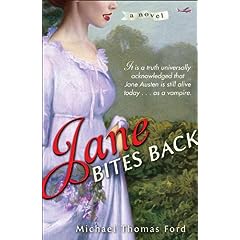 Two hundred years after her death, Jane Austen is still surrounded by the literature she loves—but now it's because she's the owner of Flyleaf Books in a sleepy college town in Upstate New York. Every day she watches her novels fly off the shelves—along with dozens of unauthorized sequels, spin-offs, and adaptations. Jane may be undead, but her books have taken on a life of their own.

To make matters worse, the manuscript she finished just before being turned into a vampire has been rejected by publishers—116 times. Jane longs to let the world know who she is, but when a sudden twist of fate thrusts her back into the spotlight, she must hide her real identity—and fend off a dark man from her past while juggling two modern suitors. Will the inimitable Jane Austen be able to keep her cool in this comedy of manners, or will she show everyone


So, what books came into your house last week?

O the first one sounds fun! I love the very "Thelma & Louise" cover.