"When other girls her age were experiencing their first crushes, Melissa Sue Anderson was receiving handwritten marriage proposals from fans as young, and younger, than she was. When other girls were dreaming of their first kiss, Melissa was struggling through hers in front of a camera. From age eleven in 1974 until she left the show in 1981, Melissa Anderson literally grew up before the viewers of Little House on the Prairie.  Melissa, as Mary, is remembered by many as “the blind sister”—and she was the only actor in the series to be nominated for an Emmy. In The Way I See It, she takes readers onto the set and inside the world of the iconic series created by Michael Landon, who, Melissa discovered, was not perfect, as much as he tried to be. In this memoir she also shares her memories of working with guest stars like Todd Bridges, Mariette Hartley, Sean Penn, Patricia Neal, and Johnny Cash.

In addition to stories of life on the set, Melissa offers revealing looks at her relationships off-set with her costars, including the other Melissa (Melissa Gilbert) and Alison Arngrim, who portrayed Nellie Oleson on the show. And she relates stories of her guest appearances on iconic programs such as The Love Boat and The Brady Bunch.

Filled with personal, revealing anecdotes and memorabilia from the Little House years, this book is also a portrait of a child star who became a successful adult actress and a successful adult. These are stories from “the other Ingalls sister” that have never been told."

"In the Pride and Prejudice Variations series, Abigail Reynolds explores the roads not taken in Jane Austen's Pride and Prejudice, imagining lively plot twists and ecstatically happy endings. Here the story picks up from a pivotal point in Pride and Prejudice—Mr. Darcy's infamously botched proposal of marriage. What if, instead of disappearing from her life after Elizabeth Bennet refuses his awkward marriage proposal, Mr. Darcy took the initiative and tried to change her mind?   In Conquering Mr. Darcy, Darcy follows Elizabeth back to her home in Hertfordshire and sets about making himself so irresistible her impulses win out over her sense of propriety until, madly in love and mutually on fire, their passion anticipates their wedding."

"Georgette Heyer fans will delight in Jennifer Kloester’s definitive guide to her Regency world: the people, the shops, clubs and towns they frequented, the parties and seasons they celebrated, how they ate, drank, dressed, socialized, voted, shopped and drove. A fun read for any Heyer fan. " 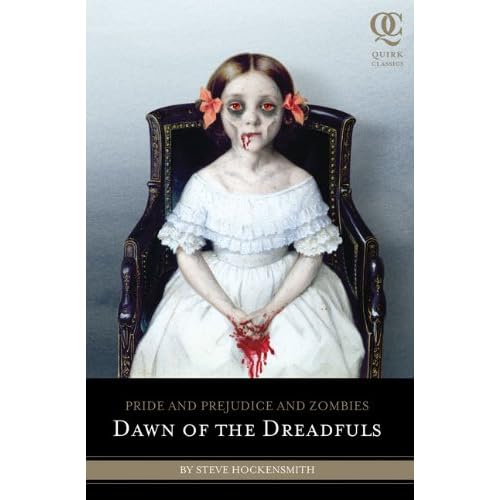 Pride and Prejudice and Zombies: Dawn of the Dreadfuls by Steve Hockensmith (publicist contact)

"In this prequel to Seth Grahame-Smith's Jane Austen revamp Pride and Prejudice and Zombies, the town of Meryton has grown quiet and complacent while the long-lived zombie menace lays dormant. Taking place five years before Bingley moves into Netherfield, and sightings of "unmentionables" have become routine, this story kicks off with a certain Mr. Ford sitting up in the middle of his own funeral. In response, the Bennet sisters begin intensive training in the deadly arts with their warrior father and a new Master. Their neighbors, much slower on the uptake, are variously dismembered, disillusioned, and eventually convinced to prepare for a terrifying final confrontation. With a sure grasp of Austen's characters and the social structures of the times, Hockensmith is loyal to the material's roots but, divorced from any particular text, he's able to take Grahame-Smith's silly, raunchy, violent tone much farther than in the first volume. Mixing taught horror-movie action with neo-Austen meditation on identity, society, and romance, this happy sacrilege is sure to please fans of Grahame-Smith's original mash-up."

Dawn of the Dreadfuls was hilarious! I reviewed it here, in case you're interested. Enjoy your new books!

--Anna
Diary of an Eccentric

what a loot! I'm drooling here!