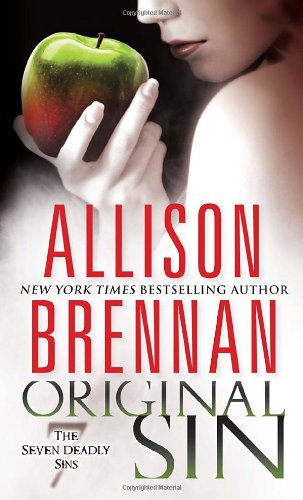 Synopsis: Haunted by chilling memories of demonic possession and murder, Moira O’Donnell has spent seven years hunting down her mother, Fiona, whose command of black magic has granted her unprecedented control of the underworld. Now Moira’s global search has led her to a small California town that’s about to become hell on earth.

Tormented by his own terrifying past and driven by powers he can’t explain, ex-seminarian Rafe Cooper joins Moira’s dangerous quest. But Fiona is one devilish step ahead. Hungry for greater power, eternal youth, and stunning beauty, the sorceress is unleashing upon the mortal world the living incarnations of the Seven Deadly Sins.


Together with a demonologist, a tough female sheriff, and a pair of star-crossed teenagers, Moira and Rafe are humanity’s last chance to snatch salvation from the howling jaws of damnation. (from Amazon)


This was my first book by Allison Brennan and she has hooked me for life. In simple terms, I loved this book. Loved it!  I found the perfect balance of a supernatural storyline (witches and demons, anyone?) with a touch of romance, all helmed by a strong, independent and very likable heroine. What could possibly be wrong with it?

While Original Sin was full of supernatural themes, witchery and demonology I found it more suspenseful than terrifying (and I mean that as a compliment). There were more than a few lunch hours that I stretched out because I simply did not want to put the book down, so engrossed with Moira, Fiona, Serena, Rafe and Anthony I had become. I was both impatient to get to the end of the book and dreaded turning that final page.

Ms. Brennan's writing is crisp, descriptive and draws the reader in quickly. I could picture not only the characters but the targeted town of Santa Louisa, as well as the demons and demonic creatures that were peppered throughout the novel.

Moira was perhaps one of the best heroines I have recently had the pleasure of meeting through reading. She's strong and determined and can take care of herself without benefit of a man just fine, thank you. What a nice surprise to have a heroine who doesn't fall apart at the first sign of trouble or danger!

Original Sin certainly isn't the first book to use the Seven Deadly Sins as its basis, nor will it be the last, but how much worse a villain could there be but Satan? I found the central Satan/Seven Deadly Sins storyline fascinating enough but Moira's backstory of being born for a purpose, running from her dangerous mother for seven years and a lost fiance were the blood red cherry on top of this paranormal sundae.

As much as I hated for this book to end, I took some consolation in knowing that Original Sin is but the first book in a three book series.    I simply cannot wait for the next book to be released so I can catch up with Moira in her quest to fight off demonic forces.

I would recommend this book to any reader who enjoys supernatural, horror or thriller genres.  For readers who appreciate a lot of romance, Original Sin may not be your cup of tea.  By the same token, if you are easily offended by crude language and/or scenes of a sexual nature, you might be more offended than interested.  I would also recommend to any television or film producer looking for a good project to look no further - - Original Sin  would make a fantastic movie!

Original Sin, the first book in the new Seven Deadly Sins series, is available for purchase now at major booksellers, including Barnes & Noble and Amazon.

Original Sin counts toward my progress in the Thriller & Suspense Reading Challenge.

Allison Brennan is the New York Times bestselling author of twelve romantic thrillers, including The Prey, Speak No Evil, Killing Fear and Sudden Death. Original Sin launches her new supernatural thriller series based on the Seven Deadly Sins. Prior to her writing career, she worked for thirteen years as a consultant in the California State Legislature. She lives in Northern California with her husband, Dan, and their five children. A member of Romance Writers of America, International Thriller Writers and the Horror Writers Association, when she’s not writing or reading, Allison enjoys playing video games and attending her kids' sporting events.  Visit the official Allison Brennan website for more information.


Review copy of this book provided by the publisher in exchange for a fair and honest review. In no way did the provision of the book affect the outcome of my review.

Good review! You're right he's the best worst villain ever.

Natalie (Id So Rather Be Reading) said...

You have an award waiting (http://idsoratherbereading.blogspot.com/2010/05/our-first-award.html)!

We love your blog :)

Melissa Sue Anderson changed into very much like her most well-known man or woman position, of the eldest baby & sister, Mary Ingalls -- a quiet, slightly shy lady who could as an alternative examine an ebook than climb a tree.