"At the age of seventy-three, New York Times bestselling author Sylvia Browne is ready to tell the whole story of her extraordinary life. In Psychic, we meet the woman behind the public figure: from the child receiving her first visits from the spirit world to the teenager doubting her own sanity; from the new mother living through staggering highs and lows to the burgeoning celebrity, and, ultimately, the successful, happily married woman she is today. Filled with never-before-told stories and otherworldly encounters, Psychic is a riveting account of how Sylvia Shoemaker, a traditional girl from Missouri, became world-famous psychic Sylvia Browne.


Nothing is off-limits. Sylvia tells the little-known truths behind her three failed marriages—including physical abuse, bankruptcy, and legal troubles—and the financial and emotional damage they wreaked. She revisits her personal demons and describes her physical challenges, including her relatively recent discovery that she'd suddenly gone blind in one eye. And then there is the greatest surprise of all: Sylvia tells how, once she had reached her seventies, and believed her romantic life was over, the real Mr. Right finally—impossibly—showed up.

While the press has freely, often bitterly, weighed in on Sylvia's most painful stories, she has remained quiet—until now. Unlike any other book Sylvia has written, Psychic reaches deep beneath the surface of her life, including professional and personal experiences that she is sharing publicly for the first time. With candor, warmth, and a great deal of humor, Sylvia Browne has written the singularly captivating tale of a life lived in two worlds, filled equally with harsh earthly realities and mesmerizing spiritual insights." (Amazon)

"If you like to make great tasting food, here are 112 recipes that will improve your health and make your taste buds sing all in one easy to follow, convenient cookbook. All the recipes taste fantastic. And they are quick and easy to make, so you can eat tasty gourmet meals that are perfectly balanced, highly nutritious, and healthy for you and your family! I personally own over 80 cookbooks from the biggest book publishers and celebrity chefs. I have tried them all. And honestly, most of them are pretty bad, overall with only a few great recipes in each book. Not this one. Believe me when I tell you... you will never find a recipe book with better tasting food, cover to cover, like you will find in Great Taste No Pain! Imagine a cookbook full of recipes that are not only great for your health, but that don't taste like cardboard! If you own many cookbooks, you can't even imagine it... because you know most of your cookbooks are pretty bad. You will not be told to eat grapefruit at every meal or drink special shakes or eliminate entire food groups from your daily meals or to eat an apple at night (THAT could make you violently ill!). Instead, you will simply be making great tasting, healthy food that makes your mouth water! What I'll teach you is a complete lifestyle. It's not just dinner recipes. They are all types of meals for all types of occasions. I'll show you how to eat wherever you are... travel, home, work, play, dining out... " (Amazon) 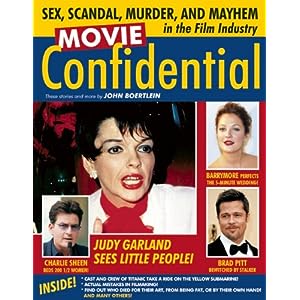 "Truth really is stranger than fiction — just look at the film industry. The product on the screen is no match for what goes on when the cameras stop rolling. Movie Confidential lays out the story-behind-the-story of Hollywood’s most sordid true tales. Encompassing sex, scandal, murder, and mayhem, it dishes the dirt on stars of the past and present. From what really happened in Fatty Arbuckle’s infamous room at the St. Francis Hotel to Eddie Murray’s "I was just giving her a ride" defense, from PCP-laced chowder on the set of Titanic to Judy Garland’s strange visions, to mysterious deaths, mistakes in filmmaking, and a multitude of other irresistible tales, this cheeky collection covers the gamut. Packed with photos and presented in the style of vintage scandal magazines from the 1950s, Movie Confidential is a compulsively readable look at filmdom’s seamy underbelly." (Amazon)

The Sylvia Browne book is probably a good read! She seems like such a sincere and nice person when I've seen her on television (but I haven't seen anything about her lately). Enjoy!

I think your blog has a terrific look!

Enjoy your newest books. They sound very good. The Sylvia Browne book attracted my interest the most. :-)

Thank you, everyone, for dropping by!

bookfanmary, I love Sylvia Browne! Her books always give me such comfort and just a solid feeling in this crazy world. I was able to attend a lecture she gave once in Atlanta and it was worth the time and money.

Juju, I will let you know if Movie Confidential shares any interesting tidbits about those wonderful classic movies. ;)

I love Sylvia Browne! I've read some commentary on this latest book, and I like that it includes more information on her as a person, since she seems so genuine and earthy!

Nice books! The Hollywood one looks particularly fun! Enjoy and have a great week!