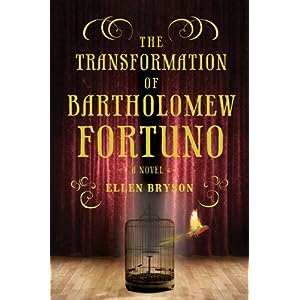 The Transformation of Bartholomew Fortuno by Ellen Bryson (publicist contact)

Bartholomew Fortuno, the World's Thinnest Man, believes that his unusual body is a gift. Hired by none other than P. T. Barnum to work at his spectacular American Museum—a modern marvel of macabre displays, breathtaking theatrical performances, and live shows by Barnum's cast of freaks and oddities—Fortuno has reached the pinnacle of his career. But after a decade of constant work, he finds his sense of self, and his contentment within the walls of the museum, flagging. When a carriage pulls up outside the museum in the dead of night, bearing Barnum and a mysterious veiled woman—rumored to be a new performer—Fortuno's curiosity is piqued. And when Barnum asks Fortuno to follow her and report back on her whereabouts, his world is turned upside down. Why is Barnum so obsessed with this woman? Who is she, really? And why has she taken such a hold on the hearts of those around her?


Set in the New York of 1865, a time when carriages rattled down cobblestone streets, raucous bordellos near the docks thrived, and the country was mourning the death of President Lincoln, The Transformation of Bartholomew Fortuno is a moving novel about human appetites and longings. With pitch-perfect prose, Ellen Bryson explores what it means to be profoundly unique—and how the power of love can transcend even the greatest divisions.

This sounds like an interesting book, hope you enjoy it :)

This does look good. I love the cover.