The first item I received last week was Cake Boss by Buddy Valvastro which I received from Simon & Schuster for review. 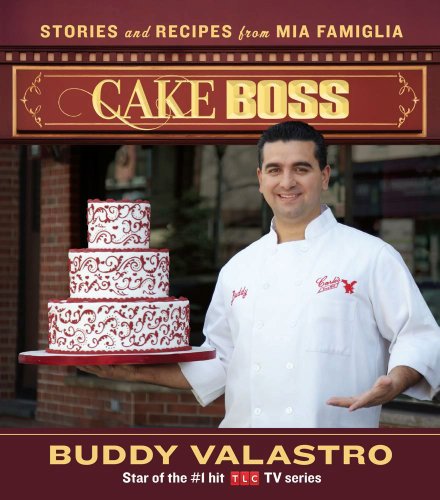 SYNOPSIS:  In this heartfelt memoir, master baker and star of the #1 hit TLC show, Buddy Valastro tells his inspiring story—and recounts his family’s warm memories from a lifetime of living, loving, and cake making.

Television viewers have fallen in love with Buddy Valastro, master cake maker, and his funny and fiery family, proprietors of Carlo’s Bakery in Hoboken, New Jersey, on the smash hit TLC series Cake Boss. Now, to coincide with Carlo’s 100th anniversary, cake designer extraordinaire Buddy Valastro brings together his passion for baking and his high-energy family stories in the pages of this charming, heartwarming book—complete with 25 recipes and tips that will make every reader the “cake boss” of their own kitchen.

Buddy’s beautifully designed cakes are the stuff of legend—and so is the remarkable story of his father, a beloved pillar of the community and himself a talented baker who set the stage for his family’s rise to the pinnacle of their industry. Cake Boss recounts the story of Buddy’s life and of his family’s bakeshop, originally established in 1910 and now a Hoboken, New Jersey, landmark and culinary tourist destination. Here also are twenty-five recipes for Carlo’s Bakery’s most sought-after pastries, pies, cupcakes, and cakes, an irresistible combination of time-tested old-world recipes and modern creations, all founded on a rock-solid “old-school” baking foundation and classic techniques.

This is the incredible true story of how Carlo’s Bakery came to be, how one hard-working family realized their patriarch’s dream of making their beloved bake shop a household name. The special bond and loving dynamic of the Valastro clan make this an uncommonly touching and truly inspiring memoir.

The next item I received was Why You Should Store Your Farts in a Jar and Other Oddball or Gross Maladies, Afflictions, Remedies and "Cures" by David Haviland which I won through a drawing on The Penguin Group's webpage.

SYNOPSIS:  The next book in the strange and fascinating series that began with the national bestseller Why You Shouldn't Eat Your Boogers & Other Useless or Gross Information About Your Body.

The national bestseller Why You Shouldn't Eat Your Boogers & Other Useless or Gross Information About Your Body uncovered everything one might want to know (and a few things one might not) about the human body. The follow-up bestseller Why Fish Fart & Other Useless or Gross Information About the World contained an artful selection of odd and/or unsavory facts about the world. Why Dogs Eat Poop scoured the animal kingdom for gross and or off-color facts about animals. In this delightfully disgusting new book in the series, David Haviland plumbs the world of medicine to uncover the answers to such vitally important questions as:

*What exactly is urine therapy?
*Is it safe to fly with breast implants?
*How did a nine-and-a-half-inch spatula find its way into a surgery patient's body?
*Why do some boxers drink their own pee?
*What is cyclic vomiting syndrome and how can one avoid it?

Any fan of the absurd and/or obscure is sure to delight in this strange (and slightly stomach-turning) book.


The next item I received was The Sherlockian by Graham Moore, which I received from the Hachette Book Group for review.

SYNOPSIS:  In December 1893, Sherlock Holmes-adoring Londoners eagerly opened their Strand magazines, anticipating the detective's next adventure, only to find the unthinkable: his creator, Arthur Conan Doyle, had killed their hero off. London spiraled into mourning -- crowds sported black armbands in grief -- and railed against Conan Doyle as his assassin.

Then in 1901, just as abruptly as Conan Doyle had "murdered" Holmes in "The Final Problem," he resurrected him. Though the writer kept detailed diaries of his days and work, Conan Doyle never explained this sudden change of heart. After his death, one of his journals from the interim period was discovered to be missing, and in the decades since, has never been found.

When literary researcher Harold White is inducted into the preeminent Sherlock Holmes enthusiast society, The Baker Street Irregulars, he never imagines he's about to be thrust onto the hunt for the holy grail of Holmes-ophiles: the missing diary. But when the world's leading Doylean scholar is found murdered in his hotel room, it is Harold - using wisdom and methods gleaned from countless detective stories - who takes up the search, both for the diary and for the killer.


The last item I received was The Inner Circle by Brad Meltzer, which I received from the Hachette Book Group for review.

SYNOPSIS:  #1 New York Times bestselling author Brad Meltzer returns with a pulse-pounding new novel of lies and deception at the highest levels of government. There are stories no one knows. Hidden stories. I love those stories. And since I work in the National Archives, I find those stories for a living.

So says Benjamin January, a young archivist who spends his days working with the most important documents of the U.S. government. When Clementine Kaye, his first childhood crush, shows up at the Archives asking for his help tracking down her long-lost father, Benjy tries to impress her by showing her the secret vault where the President of the United States privately reviews classified documents. It is also where Benjy and Clementine accidentally happen upon a priceless artifact-a 200-year-old dictionary that once belonged to George Washington-hidden inside a desk chair. Eager to discover why the President is hiding this important national treasure, the two soon find themselves entangled in a web of deception, conspiracy, and murder that will reveal the most well kept secret of the U.S. Presidency

I saw the second book on another mailbox list today. Can't wait to read your review :-)

Natalie~Coffee and a Book Chick said...

Looks like a fabulous mailbox -- you have some really interesting titles here that I haven't come across before! Enjoy! Here's my Mailbox: Coffee and a Book Chick -- Mailbox Monday...