Mailbox Monday is the gathering place for readers to share the books that came into their house during the previous week. Warning: Mailbox Monday can lead to envy, toppling TBR piles and humongous wish lists! Mailbox Monday, which was started by Marcia at The Printed Page, is on blog tour—and Lady Q at Let Them Read Books is hosting during the month of December.   Rose City Reader will be kicking off 2011 as January's host.

Last week I received Peace and Plenty:  Finding Your Path to Financial Serenity by Sarah Ban Breathnach, which I received from the publisher for review.

SYNOPSIS:  "When money is plentiful, this is a man's world. When money is scarce, it is a woman's world." Unearthed in a 1932 Ladies Home Journal, this quote is the call to arms that begins Peace and Plenty, Sarah Ban Breathnach's answer to the world's-- and her own personal-- financial crisis. As only Ban Breathnach can, she culls together this compendium of advice, deeply personal anecdotes, and excerpts from magazines, books, and newspapers-- particularly those of the Great Depression-- to inspire readers who are mired in today's financial difficulties.

Focusing on her own personal path, Sarah Ban Breathnach will relate never-before revealed details about how she fell from the financial top to the bottom. Readers will immediately see how deeply she understands the plight of those trying to maintain a happy and comfortable home, while at the same time not even knowing if they will be able to make the mortgage to keep that home.

Sarah has proved to be the voice of comfort for years to women who are spiritually bankrupt, and now she will reach to those who are financially strapped, showing them how to pull themselves out of their psychic and fiscal crises while providing deep comfort and reassurance throughout.
(Publication Date:  December 29, 2010)

As a Christmas gift I received Classic Quad Set 14 (Desk Set / Hollywood Cavalcade / How to Steal a Million / I Was a Male War Bride) - 20th Century Fox. 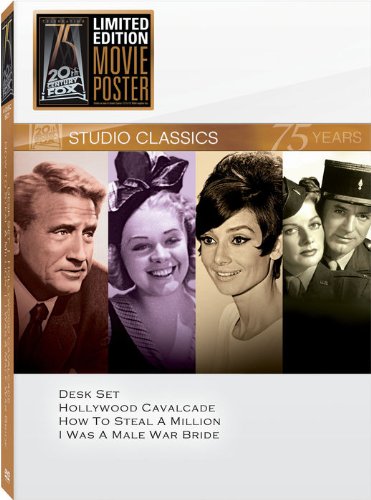 
Katherine Hepburn and Spencer Tracy star in this sophisticated workplace comedy. Joan Blondell and Dina Merrill co-star. Special features include a commentary track, a "Movietone News" newsclip about the fashions inspired by the film, the original trailer, a still gallery and trailers for several more classic Fox films.

Don Ameche and Alice Faye star in this spectacular comedy about the early days of Hollywood, from the silent era to the birth of Talkies. Special features include a documentary on the making-of and significance of the film, featurettes on Buster Keaton and Fatty Arbuckle, an outtakes clip, a "Movietone News" newsclip on the premiere, a restoration comparison, an advertising gallery and a still gallery.

Cary Grant and Ann Sheridan star in this gender-bending comedy about the travails of bringing a spouse home from the war. Special features include a still gallery, the original trailer, a "Movietone News" newsclip going behind the scenes of the film and trailers for other classic Cary Grant films.


So there is my short but sweet Christmas week Mailbox Monday. What goodies arrived in your mailbox last week?

I received for review The Elephant Keeper by Christopher Nicholson from Tribute Books Reviews & Giveaways.

"I asked the sailor what an Elephant looked like; he replied that it was like nothing on earth."

England, 1766: After a long voyage from the East Indies, a ship docks in Bristol, England, and rumor quickly spreads about its unusual cargo—some say a mermaid is on board. A crowd forms, hoping to catch a glimpse of the magical creature. One crate after another is unpacked: a zebra, a leopard, and a baboon. There's no mermaid, but in the final two crates is something almost as magical—a pair of young elephants, in poor health but alive.

Seeing a unique opportunity, a wealthy sugar merchant purchases the elephants for his country estate and turns their care over to a young stable boy, Tom Page. Tom's family has long cared for horses, but an elephant is something different altogether. It takes time for Tom and the elephants to understand one another, but to the surprise of everyone on the estate, a remarkable bond is formed.

The Elephant Keeper, the story of Tom and the elephants, in Tom's own words, moves from the green fields and woods of the English countryside to the dark streets and alleys of late-eighteenth-century London, reflecting both the beauty and the violence of the age. Nicholson's lush writing and deft storytelling complement a captivating tale of love and loyalty between one man and the two elephants that change the lives of all who meet them.

That movie set looks really cool! I love classic movies. Thanks for linking up to Mailbox Monday! Happy reading!

Peace and Plenty sounds interesting and very fit for the present economy.

Oh, that movie set would be a hit at my house. Enjoy them as well as the book!

Cool Christmas gift! I've been seeing Peace and Plenty around, but I don't think I've yet read a review - it seems like an educational read, though! Enjoy!

that sounds like a great book for anyone!! Have a great week of reading!

The book looks great, and the classic movies are wonderful!

Hope you enjoy them all.

Thanks for visiting my blog.

I need to organize all the things that came in my mailbox and work harder on reviewing them.