Yes, My Daughter Is Normal: Trials of a Thriller Writer Mom
by New York Times Bestseller Chelsea Cain, author of The Night Season


I wrote my first thriller when I was pregnant, a fact that seems to surprise some people. These people have never been pregnant. Moms understand. They know that hormones can make you do very strange things. Like eat an entire two-pound bag of peanut M&Ms. Or think up a detective and a serial killer and then have the serial killer torture the detective for six chapters.

It all started with childbirth classes.

My husband and I had signed up for a course at the hospital that taught you how to have a baby and then keep it alive the first year. It met Wednesday nights. The first night, our instructor passed around a little sack she'd knitted and announced that it was a uterus. The second night, the movies started. Childbirth videos. The camera fixed, unforgiving, right up there. All labia and crowning baby skull. These videos never went well. The babies were blue and covered in poop. Birth planes were abandoned for emergency C-sections. Surgeons would lift bloody meowing babies from their mother's wombs.

I couldn't take it.

But it was too late. I had developed a taste for violence. I started watching thrillers on TV. Brooding British thrillers where bodies were always found at night in the rain. But after awhile it wasn't enough. I started reading thrillers, too. I ordered them three at a time online, and read them back-to-back as soon as they arrived. When I came to the end of the series I was reading, I decided to write my own. This seemed very reasonable to me at the time. Hormones, remember. I started writing in our scary half-finished basement. I finished the book when my daughter was a baby, sleeping in a bassinet next to my laptop.

Here's the thing -- my estrogen fueled rantings sold big. I got a multi-book deal. I kept writing. All the books hit the bestseller list. I was a thriller writer. My books were out in 20 languages. It was great. I was making tons of money. Then a terrible thought struck me: at some point my daughter would read my books. She seemed so innocent, so unaware of the morbid tales that wound round inside her mother's head. I vowed to keep them from her, at least until she was twenty-five.

For the first few years, the topic of my job didn't come up. When we enrolled our daughter at a vegan neo-humanist hippie pre-school, I was careful to be vague about my work. Writing blood soaked thrillers would probably come off worse than the time I brought Cheddar Bunnies to the school vegan potluck.

My daughter, meanwhile, was starting to ask questions. But since she was not allowed to come to my readings, she couldn't quite grasp exactly what I did. She thought I signed books for a living. One day I caught her "signing" a book off our shelf, and I had to explain that you were only allowed to sign books that you had written.

She is six now, and writing her own books. She is also on to me. "My mother is reading a book with your mom's picture on it," a little boy she knows told her. She's also figuring out that not everyone has a skeleton in their house, or a tub of plastic eyeballs.

At some point, she's going to read one of my books and be mortified. It may be sooner than I think. Last week we were in the car and the topic of books came up. "You know that's what I do," I said. "I write books."

"I know," she said. "I'm always saying to my friends -- my mom's an author. Have you read Sweetheart?"

Sweetheart is the second in my thrillers series, and the dirtiest. When it came out I told my grandmothers that if they loved me that would never read it.

Now my daughter was talking it up on the playground.

And you know what's terrible?

It made me proud.

But she's still not reading that book until she's thirty.


Article reprinted with permission of FSB Associates and Anna Suknov. 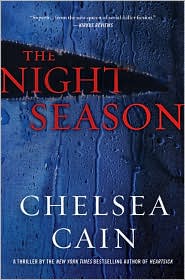 Chelsea Cain's first three novels featuring Archie Sheridan -- Heartsick, Sweetheart, and Evil at Heart -- have all been New York Times bestsellers. Also the author of Confessions of a Teen Sleuth, a parody based on the life of Nancy Drew, and several nonfiction titles, Chelsea was born in Iowa, raised in Bellingham, Washington and now lives in Portland, Oregon, with her family.

Very cute! I know, as an emerging thriller author, I would have cartwheels if I discovered my mom was an established thriller author. I think--when she does read your book--that she'll be very proud. I'm linking my blog to this post.