Today I am thrilled and honored to welcome Jane Odiwe, author of the newly released Mr. Darcy's Secret, back to Psychotic State Book Reviews.  Welcome, Jane!

I asked Jane to share with me her thoughts on why Darcy and Elizabeth continue  to be the idealized literary couple, 200+ years on. 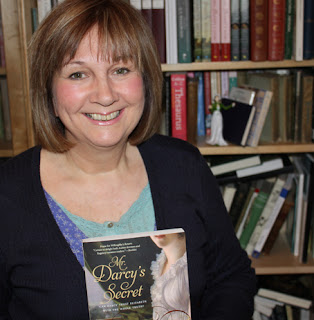 The Iconic Darcy and Elizabeth
by Jane Odiwe

Thank you so much, Lori, for inviting me to talk about Elizabeth and Darcy, the iconic romantic couple.

Elizabeth Bennet and Fitzwilliam Darcy are perhaps Jane Austen’s most beloved characters. Pride and Prejudice was written more than two hundred years ago, yet these characters remain as fresh and fascinating to us as ever.

So, why do we love them so much? Jane Austen tells their story through Elizabeth’s eyes so it’s easy to identify with this heroine who is lively, witty, and loveable, as much for her faults as for her charms. We identify with her because we feel she is like us. Elizabeth is capable of making mistakes, but having realised her errors, she changes and we see her character develop as the story enfolds.

The first time we really see the interaction of Elizabeth and Darcy it is at the Meryton Assembly. Mr. Darcy is seen to be behaving in a particularly disagreeable manner, dancing only with Mr. Bingley’s sisters and ignores everyone else in the room. Everyone has heard that he is a rich landowner, but his wealth and bad manners only serve to make him appear arrogant. He doesn’t seem to care that his words may be overheard. In fact, he is almost goading Elizabeth whom he has heard described as a pretty girl. It’s almost as if he wants to make her aware that she is nobody special, he can have any woman in the room.

“She is tolerable; but not handsome enough to tempt me; and I am in no humour at present to give consequence to young ladies who are slighted by other men.”

It’s no wonder she dislikes him instantly!

At this stage, we also think he’s horrid, it’s only when their relationship starts to develop that we think about the undeniable ‘chemistry’ between them, and question their attraction to one another from what seems such an unpromising start.

To our utter delight, Mr. Darcy finds himself attracted to her even though he is determined to find fault with her, and when she refuses to stand up with him for a dance later on, we rejoice at her opportunity for revenge. The lively banter that ensues between them is what makes their relationship so satisfying. In every respect, Elizabeth proves herself equal in intelligence. She is no simpering female. When they are thrown together at the Netherfield Ball, Darcy begins to enjoy Lizzy’s lively conversation and pert manners. Although she is determined to continue her dislike of him, she agrees to dance with him before she can help herself. The conversation that flies between them is an exercise in brilliant dialogue as each of them tries to better the other with a witty retort. Elizabeth is beginning to realize that however fixed her first impressions of Darcy seemed initially, her opinion of him is changing. She recognizes that they have similarities in their characters; they both like to think that they can use their intellect coupled with a wry sense of humour to win an argument or to make a point.

They behave for the most part as opposing forces that cannot help being attracted to the other. Elizabeth prides herself on reading the psychology of people – she likes to know what makes them tick. The infuriating thing is that she cannot make Darcy out, when she thinks she has the upper hand, he then seizes power to have the whip hand over her.

It is the continual sparring between Elizabeth and Darcy that we especially enjoy. One of them says something designed to provoke the other, and we wait with bated breath to hear their reaction. Eventually, Elizabeth comes to know the real Mr. Darcy as he lets his guard down and when she discovers the quiet way in which he saves her sister Lydia from ruin hence making it possible for their eventual alliance, Elizabeth knows she has been wrong to judge him. Darcy falls in love eventually for all the right reasons – Elizabeth’s intelligence and lively ways have captivated him, and he enjoys the fact that she is not afraid of him or sycophantic toward him. They both change to suit the other because they really love one another unreservedly. Mr. Darcy and Elizabeth both make mistakes, but try to put them right and because they admit to their shortcomings, we love them all the more! In their own way, they have both been proud and prejudiced, but by the end of the book we feel they will never be so influenced by ‘first impressions’ again.

In Mr. Darcy’s Secret, I wanted to explore this theme again bearing in mind that they are both changed, and so will not be so quick to judge the other. Elizabeth, in particular, tries hard not to behave as impulsively in the past, but in the end, when her doubts and fears get the better of her, she knows she cannot be anything but true to herself, which leads to some confrontation. Only for a short while, of course, because with Darcy and Elizabeth, there has to be a happy ending!

I wonder if your readers agree with me. Are Darcy and Elizabeth the most iconic, romantic couple in literature? 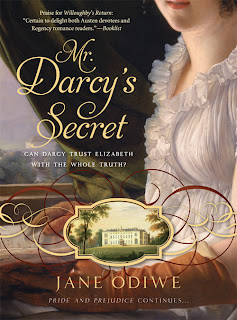 One dark secret can completely ruin a bright future. . .

From the author who brought you Lydia Bennet's Story and Willoughby's Return, comes a unique look into one of the most famous relationships of all time, in Mr. Darcy's Secret.

After capturing the heart of the most eligible bachelor in England, Elizabeth Bennet believes her happiness is complete-until the day she makes an unsettling discovery. When she finds a stash of anonymous, passionate love letters that may be Darcy's, Elizabeth begins to question the quiet, stoic man she married.

Jane Odiwe is the author of Mr. Darcy's Secret, Willoughby's Return, and Lydia Bennet's Story. She lives in High Barnet, North London, and Bath, England, with her husband, three children, and two cats.

In 2003, her obsession with all things Austen really took off when she wrote and illustrated a little book, 'Effusions of Fancy, consisting of annotated sketches from the life of Jane Austen in a style entirely new,' which is a light hearted celebration of Jane Austen's early life, in letters and paintings. In 2007, Jane was thrilled to be asked if Sony Pictures could use her Jane Austen illustrations in a short film; a biography feature about the author on The Jane Austen Book Club DVD.

It was a short step to writing her first novel, Lydia Bennet's Story, a sequel to Jane Austen's Pride and Prejudice. Her lifelong dream of becoming a published author came true when Sourcebooks editor, Deb Werksman, rang her one cold, December evening asking to meet her in London the next day to discuss publication. Sourcebooks published Lydia Bennet's Story in October 2008.

Mr Willoughby's Return, a sequel to Sense and Sensibility, was published in autumn 2009. Mr Darcy's Secret is to be published in February 2011, and Jane is contributing to a short story anthology, Jane Austen Made Me Do It, to be published by Ballantine Books, autumn 2011.


So, readers.  What are your thoughts?  Are Darcy and Elizabeth the most iconic, romantic couple of literature?  Or does that crown belong to another couple?
Posted by Lori Johnston at Tuesday, February 15, 2011

Hi Lori! Hi Jane! I see that we both like the same bloggers! I think D&E are way up there in the most romatic couple pantheon. In my mind, they are tied with Capt. Wentworth and Anne Elliot b/c, after all, Frederick and Anne waited eight years for each other. Now that's love.

Also, Rochester and Jane, but that story is a bit strange--keeping one's wife in the attic is bad form. :)

oo, good question. Something to really think about

Thank you so much for this lovely guest spot, Lori. Thank you for the lovely comments!