Today I am happy and excited to welcome Kara Louise, author of the newly published Only Mr. Darcy Will Do, back to Psychotic State Book Reviews.  Welcome, Kara!

I asked Kara to share with me her thoughts on transporting her readers to Pemberley.

Transporting the Reader to Pemberley
by Kara Louise

Thanks for inviting me here today. I thought I would talk a little bit about Pemberley and Elizabeth’s first impression as given to us in Pride and Prejudice, and compare it with her first impression from my new book, Only Mr. Darcy Will Do.

OMDWD is a variation of P&P where Mr. Bennet has died and Elizabeth has to become a governess. She soon discovers that the family for whom she works has a previous acquaintance with Mr. Darcy. The last thing she wants is for them to discover her past with him or to be thrown into his presence. To her dismay, the family receives an invitation from Mr. Darcy to come to Pemberley for two weeks.

Pemberley is Mr. Darcy’s grand estate located in Derbyshire. When Elizabeth first visits it – in both books – she has no idea what to expect. Here are some of the descriptions that Jane Austen gives us when Elizabeth first sees it.

The park was very large, and contained great variety of ground. They entered it in one of the lowest points, and drove for some time through a beautiful wood, stretching over a wide extent… They found themselves at the top of a considerable eminence, where the wood ceased, and the eye was instantly caught by Pemberley House. Situated on the opposite side of the valley, into which the road with some abruptness wound. It was a large, handsome, stone building, standing well on rising ground, and backed by a ridge of high woody hills; – and in front, a stream of some natural importance was swelled into greater, but without any artificial appearance. Its banks were neither formal, nor falsely adorned…

Elizabeth is impressed with the grounds at Pemberley and their natural beauty. So different from the grounds at Lady Catherine’s, which had more of a harsh, artificial tending.

In OMDWD, Elizabeth comes upon Pemberley more than a year after Mr. Darcy’s proposal. Because of her father’s death, she was not able to take the trip with the Gardiners and, therefore, visit Pemberley the summer before. She not only had that year to think about the contents of Mr. Darcy’s letter and ponder the man, but now has the added admiration of him by the Willstone family, and in particular, the sister of Mrs. Willstone, who has had a strong admiration for him for some time.

When the family is invited to Pemberley, Elizabeth accompanies them; knowing Mr. Darcy most likely still harbors great bitterness towards her. Unlike her visit in P&P where she understands that he is away from home and therefore won’t likely see him (and we know how that turns out), this time she knows he will be there and will forced to be in his company for two long weeks. And because Elizabeth is now a governess, her standing is society is even further beneath him.

Here is Elizabeth’s first view of Pemberley from OMDWD:

Elizabeth’s eyes took in everything around her. She noticed a wide, briskly moving stream that seemed to dictate to the road its curves and turns and straight paths. Sometimes it disappeared behind the trees and at other times it burst forth from those very trees as it continued on its way…

…Elizabeth saw delightfully beckoning mounds and valleys, a myriad of flora and fauna, and the ever-present stream urging them along.

…Elizabeth gasped, for there in all its splendour was Pemberley. Situated majestically across a small crystal blue lake, it rose in stature and breadth in glorious prominence…

…The setting sun cast an ethereal golden hue across the stone edifice. The deepening oranges and reds of the clouds painted a rainbow palette of colours as it reflected down on the lake at the front. A slight breeze stirred small white caps on the lake, distorting the mirrored image of Pemberley that extended down into the depths of the water.

Elizabeth was very much impressed with the grounds when she first saw Pemberley. What about the interior of the home?

In P&P, we follow Elizabeth as she admires the grounds from every window. Elizabeth viewed the rooms as large, well-proportioned, and handsomely fitted up. The furniture in the rooms was suitable to the fortune of their proprietor… but with admiration of his taste, that it was neither gaudy nor uselessly fine; with less splendor, and more real elegance, than the furniture of Rosings.

In OMDWD Elizabeth’s first impression on stepping into Pemberley is one of continued admiration: Elizabeth stifled the gasp but could not conceal her look of admiration as they stepped into the entryway. It was truly majestic, in a way that gave honour to those who built it centuries before, as well as its heritage through the years. She could not deny that it was everything agreeable to her sensibilities.

In P&P we learn from Caroline Bingley that Mr. Darcy had an extensive library, but we never experience Elizabeth seeing it. In OMDWD Elizabeth not only visits the library, but has quite an embarrassing situation occur while in it. I’ll leave it to you to read the book to find out what happened there, and to take a more extensive tour of that magnificent estate, Pemberley.

In writing variations of Jane Austen’s novels (or sequels or prequels), we depend upon her descriptions and then take them from there. Hopefully we do her justice in those things we add to or embellish. Pemberley is grand, and it was fun to write about Elizabeth’s first impression of it, and walk with her as she admired the home, explored the grounds, and encountered Mr. Darcy here and there, all the while wondering what he must be thinking of her!

Thanks for letting me share with you today, and I hope that you were transported – in maybe a small way – to Mr. Darcy’s great estate Pemberley! 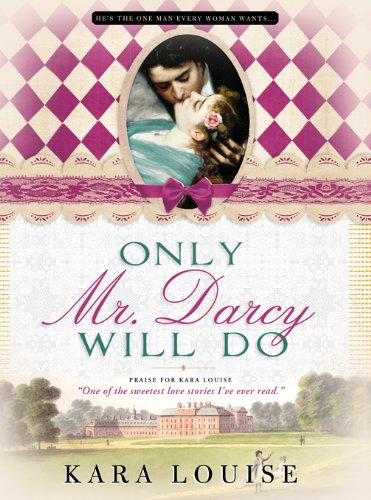 ONLY MR. DARCY WILL DO BY KARA LOUISE - ON SALE NOW!

In this fresh and original retelling of Jane Austen’s Pride and Prejudice, Mrs. Bennet’s greatest fear comes to pass — Longbourn is entailed to Mr. Collins. Elizabeth finds work as a governess in London, widening the social divide between her and Mr. Darcy and making it more difficult than ever for them to find their way to each other...

Only Mr. Darcy Will Do
Published by Sourcebooks

So, readers . . . was Kara successful in transporting you to Pemberley?
Posted by Lori Johnston at Tuesday, March 29, 2011

I love the library scene! I couldn't help but smile while reading it. Also, I enjoyed reading Elizabeth's reaction to seeing Pemberley for the first time (in both novels). However, the one thing that made me smile while reading her reaction in OMDWD is how Elizabeth tries to hide her reaction for fear of Emily and Miss Matthews' observance. I can only imagine what thoughts are going through Elizabeth's head while all this is taking place! I like to ponder on what her exact thoughts would be in regard to Mr. Darcy, Pemberley, Rosalyn, her situation, and so much more!

Day Tripper,
Thanks for stopping by! Like you, I love all things Austen, Darcy and Pemberley - - you cannot go wrong with Kara's books. I hope to have my review of this lovely new book up by the end of the week.

Jakki,
So glad you stopped in. I agree, the library scene was so sweet. I particularly enjoyed the chess scene as well, with the underlying tension and messages. I certainly would have loved to read about Mrs. Willstone's and Rosalyn's shock over the Darcy-Elizabeth engagement!

Yes, the chess scene is one of my favorites as well! I love scenes where the two of them talk with meaning that others are unaware of and where there is also this tension.
I too would enjoy reading a missing/deleted scene going more in depth as to Rosalyn and Mrs. Willstone's reactions to the engagement. I can just picture the having a haughty and catty conversation. It would be like how some variations portray Caroline Bingley's reaction to the news! :)

This was a lovely visit to Pemberley! It has me longing for summer, though!