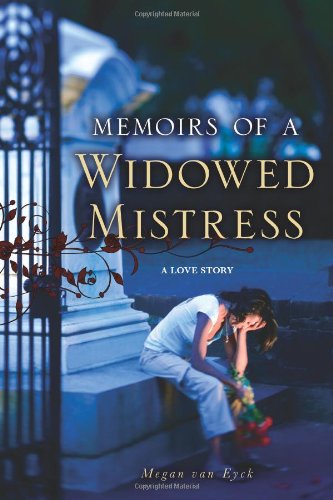 BOOK DESCRIPTION:   Memoirs of a Widowed Mistress is a cautionary tale about the causal relationship between marital emotional neglect and questionable choices. It is a warning for the spouse who wants to dismiss an affair as just sex or for any woman who thinks love is enough to keep a man that isn't really hers.

"You never know what happens between two people when they are alone" is a common sentiment reserved for married couples who appear to have relationships that defy the odds. The same can also be said for couples involved in long-term adulterous affairs.

Many people believe that infidelity is only about sex: two people, one hotel room, and a few hours to spare. And Megan van Eyck's extramarital affair began just like that, with lusty hours spent between hotel sheets. But within a few months van Eyck realized she had found what she and her lover did not know they were both looking for: true love.

Memoirs of a Widowed Mistress offers an honest look behind closed doors. It is a forthcoming, sometimes steamy, account of both the passion and the heartbreak associated with being a mistress; about the futility of sharing a love while not sharing a life. Van Eyck is reflective as she addresses her compelling and unusual personal history, which made being the other woman an acceptable option. She makes no excuses for herself, her mistakes, or her betrayal of her husband as she recklessly pursues love. She wants everything, unabashedly.

But her priorities shift when Carlos, her lover, is diagnosed with Amyloidosis, a rare blood disorder. Her concerns shift for hoping for a life with him to hoping that he'll be able to live through treatment for this rare and incurable disease. In the end, van Eyck must not only come to terms with her loss, mistakes and regrets, she must come to terms with herself.

The subject matter - - adultery - - is mature, it's highly emotional and everyone has an opinion on it.  And Megan van Eyck pulls no punches in recounting an airport meeting that was intended to be a one-night stand and instead became a passionate five year long affair.  She makes no excuses for her relationship with Carlos, instead freely admitting that if it were not for her children and her fear that they would be taken from her, she would have happily run off with her married lover.  van Eyck's husband is presented as a flawed character who blames van Eyck for their marital difficulties pre-affair but ultimately is shown as a man who is suffering with his own pain and dysfunctions.

van Eyck lays bare chapters of childhood memories, which lead her on the path to destructive relationships, an unfulfilling marriage and down the road of betrayal.  I felt her shame and pain in the descriptions of her father's neglect after her parents' separation and divorce, and the appalling condition of the home she shared with her mother, as well as her mother's appearance and behavior.  If van Eyck is attempting to psychoanalyze the person she is today by looking back on her childhood environment, the window revealed in this book is a fascinating one.  I was angry with her father, wishing I could jump through the book's pages to yell at him and shake him, for teaching van Eyck  a woman's place in his world and affecting her sense of self-worth.

Carlos is presented through van Eyck's eyes, as a passionate and loving man, married to a woman who neither understands him nor appears to care to try.  I liked Carlos merely because van Eyck's love for him is so saturated in the pages of this book, it's impossible not to.  Leading me to another confession - - I didn't want to like him any more than I didn't want to like van Eyck.  But like him I did - - and I felt grief upon reading of his eventual terminal illness.  As well as anger over his wife's seeming coldness toward it.

Of course we don't have her side of the story, only van Eyck's.  van Eyck is so brutally honest throughout the book that I almost felt like a voyeur, peeking into her private life.   She recounts many details of her affair with Carlos, including their active sex life and the lies they each told their respective spouses and families.  I did wonder often as I read how both were able to lie so often and so easily to their families and how they were able to keep their relationship a secret for so long. I also can't help but wonder how van Eyck's family may feel now, having her betrayal so publicly memorialized.

Regardless, Memoirs of a Widowed Mistress is an emotional roller coaster ride of a book, shocking, disturbing, raw and heartwrenching.  And hynotizing.  It's a heavy read and yet I couldn't put it down.  It's not for the weak of heart - - there is quite a bit of descriptive sex and some language that more discerning readers might find objectionable.  In the end, though, Memoirs of a Widowed Mistress is a tale of two unfulfilled people who found fulfillment, however briefly, with each other.  As the byline of the book states, "A Love Story".  And the illicit affair ended up providing van Eyck not only with a loving partner in Carlos but also, eventually, with a loving partner in her husband.  I ended up liking both van Eyck and Carlos and I think, by the last page, I understood her.

Memoirs of a Widowed Mistress is available for purchase now at major booksellers, including Amazon. I am an Amazon affiliate. If you make a purchase through my link, I will receive a small commission.  5% of all profits made on this book will be donated in Carlos' memory to Amyloidosis Support Groups.

Thank you to Dorothy Thompson and Pump Up Your Book Promotions for the opportunity to participate in this blog tour.

This is the 2nd review that has made me say I want to read this. I enjoy stories about this hard but very real situation.

I couldn't imagine having it captured in print though, it is something you will never forget but this is so in your face, wow.

Great review!! I also read and liked this book. I agree, after reading the book, I liked Carlos and Megan, and I admire her honesty. I really wish the best for her and her family!