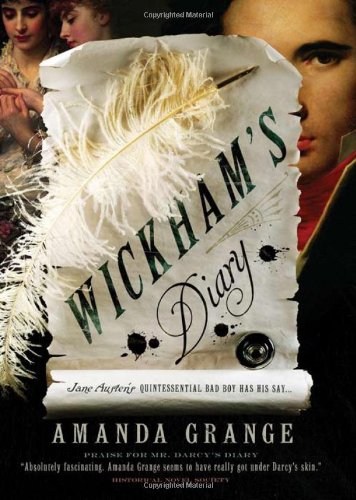 BOOK DESCRIPTION:    This prequel to Pride and Prejudice begins with George Wickham at age 12, handsome and charming but also acutely aware that his friend, Fitzwilliam Darcy, is rich, whilst he is poor. His mother encourages him to exercise his charm on the young Georgiana Darcy and Anne de Bourgh in the hopes of establishing a stable of wealthy social connections.

Let's start with the utterly shallow on this book.  The cover is divine, isn't it?  I love the plume through the paper, I love the man (presumably Wickham) on the right side of the page with only half his face revealed (a portend of Wickham never truly revealing all himself?)  and the ladies on the upper left (Wickham's weakness).

On to the actual book, I love that author Amanda Grange took Pride and Prejudice's bad boy, extremely relevant to the overall story and yet still a supporting character, and based a book around him.  After all, Jane Austen didn't give much insight into George Wickham's mind and actions, other than through others' recountings.  The reader receives some strong ideas from Wickham's own fictionalized tales to Elizabeth but the focus remains on Elizabeth and how she perceives Wickham's tales and how this affects her presumptions toward Mr. Darcy.

Wickham's Diary allows readers to peek inside George Wickham's world, as the son of the weathy Mr. Darcy's steward and a flighty, flirtacious mother, through relatively brief diary entries spoken in his voice. The entries begin when Wickham is twelve, and already chafing against the system that does not allow him to be young Fitzwilliam Darcy's equal.  The undertones of jealousy and resentment are already set, heightened by young George's mother's wish of a more affluent lifestyle and her assertions to her son that he will do something better with his life than becoming a steward.

I was fond of seeing Wickham's home life from his own perspective and what events conspired to shape him into the rogue we were introduced to in Pride and Prejudice.  His mother proved a fascinating character, far more so than his father, and Wickham's relationship with her, told through the author's eyes, explained a lot of his future endeavors.

I also enjoyed seeing the characters and set ups that would eventually come to shape Pride and Prejudice and the roads that would lead Wickham to Meryton on the day that would bring him into the Bennet family's world, with Mr. Darcy and Mr. Bingley to witness it.

It was additionally rewarding to see the Darcy family from an outside eye, even one as jaundiced as George Wickham's.  Most Pride and Prejudice retellings focus on Darcy as an adult already, so it was pleasurable to read about him as a young boy and adolescent.  It was also nice to read about the senior Mr. Darcy, since very little has been written about him other than being a good man.

Despite these excellent points, I was discouraged that the book was so slim.  Granted, George Wickham is not as major a character as Mr. Darcy, or Mr. Knightley from Emma, (author Amanda Grange has written "diaries" of these characters, among others) but I do think he was slightly shortchanged in this tome.  For example, the book ends prior to his fateful meeting with the Bennet girls in Meryton.  I, for one, would have loved to read Wickham's viewpoint on seeing Darcy, for the first time since his aborted elopement with Georgiana, in the village, and upon meeting both Elizabeth and Lydia.  I also would have liked to know his thoughts on Lydia and her silliness and exactly what drove him, beside hormones, to encourage Lydia to believe he was going to run off to Gretna Green with her.  And who wouldn't want to know Wickham's thoughts upon his first introduction to his eventual mother-in-law, Mrs. Bennet?

Unfortunately, Wickham's Diary deprives the reader of that.  I can only speculate that the author ended the book where she did, assuming that Pride and Prejudice readers would be able to figure out, based on Jane Austen's book, what happened next with Wickham.  True enough, but it still would have been a fun ride to continue.  And space did indeed allow.

All that said, I enjoyed Wickham's Diary and found it a speedy, entertaining romp through George Wickham's world of drink, debauchery and drive.  For Pride and Prejudice fans, it should go on their wish list.

Wickham's Diary is available for purchase now at major booksellers, including Amazon. I am an Amazon affiliate. If you make a purchase through my link, I will receive a small commission.

Review copy of this book provided by the publisher in exchange for a fair and honest review. In no way did the provision of the book affect the outcome of my review.

This book qualifies toward my JANE AUSTEN IS MY HOMEGIRL READING CHALLENGE.
Posted by Lori Johnston at Thursday, May 19, 2011

A very informative and fair review of this novel! I too would have loved a longer story.