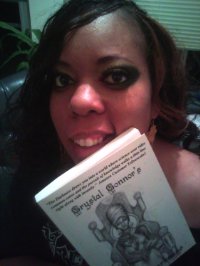 My Early Writing by Crystal Connor

The reason I started blogging is because I used to belong to a writing group called Author’s Anonymous. What attracted me to the group was the fact that the founder gave us all writing assignments, and we posted them to our blogs so that other we could read, critique and comment on our fellow members stories. It was an amazing group but as we, as writers, spent more and more time with our own writing goals and deadlines we just didn’t have the time to commit to our group.

I am going to share two of my “early works” that I posted while a member of Author’s Anonymous with you today. I hope you enjoy them.

Coaches instructions: If you had to describe yourself as a color, which would you choose and why?

So I was going to skip this assignment to work on the next one (which seems so kick ass, totally fun with a ton of room to maneuver…and that's right up my alley)

This drill seemed a little challenging and I couldn’t find a way not to incorporate race and clearly that’s not what’s she’s asking, but it’s the 1st thing that came to mind and the only thing that stayed there.

Because I sooo do not want to do this assignment I’ve decided to do it twice…two different stories. If you wanna wear daisy dukes you gotta do your squats & lunges there is just no way around it.

The little girl asked me what color I was and the question caught me completely off guard and ushered in a flood of memories that I had tried for ten years to forget.

Once I was alone and had more time to think about her question I realized I could no longer remember my native planet. I couldn’t remember what it felt like to breath relatively clean air or enjoy the warmth of the sun beneath the protective barrier of an ozone layer. That was a long time ago and Earth is no longer there.

This planet was different. The landscape was harsh and colorless, the weather was openly hostile and it was as if the sun was trying to use the cleaning power of fire to rid her 5th planet of disease.

It’s surprising how quickly the human body can adapt and evolve but I guess we can thank Monarch Pharmaceuticals for that because God had nothing to do with this.

Out of the 758,459 of us who had won the lottery to escape the Garden of Eden that God had given man in the form of Planet Earth, only twenty-eight of us were still alive. In this sector there were only two of us but that wouldn’t be the count for long because Eric was dying.

In just 10 years I had become known as a settler. I was an immigrant, a relic from the “old country,” with an outdated language, ancient customs, and conservative ways and I am only forty.

Thanks to Monarch Pharms, to deal with the combative environment of the brave new world, I no longer had skin but scales. I was still humanoid in form and so were the natives…sort of.

You could still see that I had once been beautiful and I think that is why the youth of this planet got themselves “scaled” despite the fact that their shinny chromed skin was more than capable of dealing with the proximity of a sun that never set. Like the young of planet earth, who in emulated African body modification by stretching their ears without fully understanding the culture or significance behind the act. Some things never change.

I closed my eyes and let my memory recall the green rolling hills, red desert sands, and canyons carved from lakes, and deep blue-green seas that had once been my home. In my minds eye I saw the girl and heard her question asked and asked again…

And here is my 2nd attempt. It’s not a short story it’s a poem and I was so incredibly blown away by how this piece turned and the amount of feedback that I got from it I used it as the dedication it to my mom in The Darkness

As you know I did not want to do this drill. It’s still just as challenging as when I wrote the 1st Color and I still couldn’t find a way not to incorporate race.

Well like I promised I gave it another shot.

I am the color of the Red Sands of African a land where my roots were 1st planted.

I am the color of Oxidized Iron, from shackles that bound my predecessors in the storage hold.

I am the color of the green, brown, and white cotton fields and I am the color red from the blood that ran down the fingers that picked them.

I am the blue color of the Civil War Union uniform.

I am the white hot color of rage, I am the iridescent color of tears, I am every color on the spectrum from orange to red in outrage and am the bottomless color of black by the betrayal that the Choctaw people felt when being removed from lands that been held since antiquity.

I am the Silver-Blue color of The Rio Grande that “Los Mojado’s”, the wet ones, risked their lives to cross in order to make a better life for their heirs.

I am the color of fire that burned bras in the 60’s.

I am all the bright colors of the arrogant peacock, because I am the color of my ancestors.

Thank you, Crystal, for sharing your writing with us.  So, readers . . . what color are you?

THE DARKNESS BY CRYSTAL CONNOR
ON SALE NOW! 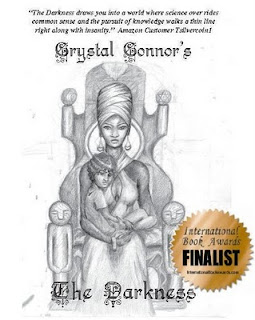 The Darkness has been selected as a two time Award-Winning Finalist in the 2011 International Book Awards in the fiction categories of Cross Genre Fiction and Multicultural Fiction!


Artemisia, a scientist who also practices alchemy, is wealthy beyond imagination. She is one of the founding members of the Skyward Group, a privately funded, secret, research facility conducting experiments that erase what tradition has established as the boundaries separating the realm of man from the realm of God. Artemisia has everything she wants - money, fame, knowledge and power - except for a child. Inanna is a powerful and dangerous witch, also wealthy beyond imagination. Her powers are greater and more deadly than any in the long tradition before her. Inanna has everything she wants - money, knowledge and God-like power - except for a child. The Child has nothing. At three months of age, he knows only what he has experienced through the bars of his locked cage. He has nothing. He doesn't have a mommy. He doesn't have a daddy. He doesn't have a name. The scientists who created him do not handle him, because they know The Child is dangerous.

In The Darkness, Two women clash in a vicious battle that has been fought since the days of King Solomon - the fight over a child. One woman unleashes the nightmarish arsenal of modern science while the other dispatches the weaponries of witchcraft. And as The Child grows up, his love for one and resentment for the other will change the fate of both these women, forever.

Email ThisBlogThis!Share to TwitterShare to FacebookShare to Pinterest
Labels: Crystal Connor, The Darkness

Good reviews of books you have there. Continue to blog to inspire others.