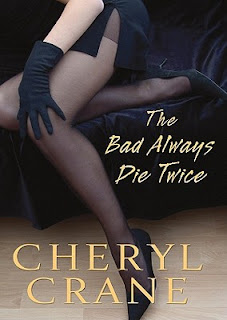 BOOK DESCRIPTION:  Set in Hollywood, The Bad Always Die Twice is the first of a wildly entertaining series set amidst the bright lights, big egos, and Botoxed brows of Hollywood. It is partly the glitz and glamour of Jackie Collins novels and partly the LA streets of hard-boiled James Ellroy.

Who better to tell this tale than Cheryl Crane, daughter of Hollywood legend Lana Turner and actor-restaurateur Joseph Stephen Crane? Cheryl was involved in the Johnny Stompanato scandal of the same period. She allegedly killed the hoodlum because he threatened to kill her mother.This mystery features Nicki Harper, the daughter of a screen goddess, who is raised in a completely dysfunctional home populated by a cast of crazies but who did not follow in her mother's footsteps. Instead, Nikki is a real estate agent who wants a quiet, comfortable life with a little love and happiness thrown in.

Up until now, Nicki always thought that dead meant dead. But then, film icon Rex March turns up freshly murdered in the bed of Nicki's best friend after being reported dead six months ago. A little distrustful of law enforcement, Nicki feels compelled to solve the murder on her own. Her acquaintances range from the pinnacle of Hollywood royalty to the bottom of Tinseltown's barrel, including a not-so-grieving widow, a conniving younger lover, a best friend with secrets, a jilted mistress, a ''closeted'' confidante, a wacky neighbor, and a scheming business partner. Rex has a gaping hole where his eye used to be, and Nicki knows a lot of people with motives for the murder. The killer is getting ready for a repeat performance, so Nicki must act fast before her own screen fades to black.


As a devout and obsessive reader, I am always delighted to discover a new author and/or a new series that I can follow.  While author Cheryl Crane is not new to me (her autobiographical account Detour is fascinating and de rigeur Hollywood reading), her new series involving realtor and intrepid detective Nikki Harper is.  And if The Bad Always Die Twice is any indication, the series will be a wonderfully pleasing diversion that any reader can eagerly revel in.

I'm not certain which aspect of The Bad Always Die Twice I liked better - - the amateur sleuthing or the classic Hollywood connection.  The sleuthing, performed with a stealth like grace by heroine Nikki, was entertaining, breath stopping and nervewracking.  Nikki proved to be a feisty character, a tenacious lady who appears to live by the motto "all things are possible".  She simply cannot be kept down and she doesn't give up.  I immensely enjoyed her as a heroine; she was smart, quick and self sufficient and established herself quickly as a very devoted friend and daughter.

But let's talk about Nikki's mother, the regal, classy and very indomitable Victoria Bordeaux.  Victoria was a 1950s movie actress, a sexy siren who still lives her every day as the very elegent star she was once was (and still is for many fans).  I absolutely and positively loved her with the passion of a thousand suns.  Maybe it was due to author Cheryl Crane's own famous mother but throughout the book, I visualized Lana Turner as Victoria Bordeaux and just thrilled at every scene that included her.  To say that Victoria was a scene stealer would be a drastic understatement - - this lady owned every page she was on!

Between these two incredible female characters is indeed a mystery, a "whodunit?", that is clever and will keep you guessing until the end.  I was surprised by the reveal, not disappointed in the least, and gratified that Ms. Crane didn't insert characters/plots/red herrings that did not pay off in the end.

Despite being a realtor herself in her "other" life, Ms. Crane is a very adept and able writer.  The dialogue is fresh, not forced or stilted, and the characters are a fun panorama of L.A. area residents.  Purveyors of home and garden goods will love the references to property amenities while fashion junkies will excite to the designer handbags and shoes.  The pages will fly by as you read The Bad Always Die Twice and, if you are like me, you will be left anxious to return to the glamorous Victoria Bordeaux and her Movie Nights with daughter Nikki and her two beloved dogs.  The Bad Always Die Twice is the kind of book that you simply won't be able to put down, nor will you want to.  Highly recommended and I would beg of Ms. Crane to please include generous doses of Victoria Bordeaux in future books!

The Bad Always Die Twice is available for purchase at major booksellers now, including Amazon.  I am an Amazon affiliate. If you make a purchase through my link, I will receive a small commission.

Review copy of this book provided by BookTrib and Kensington Publishing Corp. in exchange for a fair and honest review. In no way did the provision of the book affect the outcome of my review. 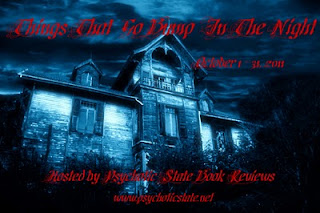 Email ThisBlogThis!Share to TwitterShare to FacebookShare to Pinterest
Labels: Cheryl Crane, The Bad Always Die Twice, Things That Go Bump in the Night

Hi Marce, thanks for stopping by. Yes, this book was a lot of fun. It will keep you guessing and you won't want to put it down. I can't wait for the next book in the series.
Have a great day!