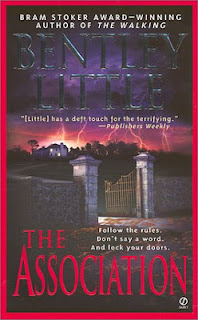 BOOK DESCRIPTION:  Barry and Maureen Welch are thrilled to exchange their chaotic California lifestyle for the idyllic confines of Bonita Vista, a ritzy gated community in the unincorporated fictional town of Corban, Utah. But as Bonita Vista residents, they're required to become members of the neighborhood's Homeowners' Association, a meddling group that uses its authority to spy on neighbors, eradicate pets and dismember anyone who fails to pay association dues and fines. Maureen, an accountant, and Barry, a horror writer who is banned by the association from writing at home, soon find themselves trapped in the kind of deranged world that Barry once believed existed only within the safety of his imagination.

I am a big fan of Bentley Little.  His books taken a very simple premise and turn that premise on its ear and with very chilling results.  I expected no less from The Association . . . and was disappointed.

The premise for The Association is fantastic, especially if you have ever had to deal with a homeowners' association, nosy neighbors and the strange peccadilloes you may find in certain neighborhoods.  What if the homeowners' association didn't just meddle with regards to your landscaping but your life in general, complete with hidden cameras, spies and brutal punishments for not paying your dues?  And what if this neighborhood is guard gated to the point of no one entering or leaving without permission?  Scary, right?  The very thought of it chilled me.  But something was lost in the eventual translation.

I liked Barry and Maureen Welch, who wanted to leave the frenzied Los Angeles lifestyle for the relative serenity of Utah.  They believed they found their Utopia via an incredible real estate steal in Bonita Vista.  Both are smart people, who easily miss the red flags in the beginning and then simply don't want to believe the unbelievable explanation.  I could relate with them and feel for them . . . at least for the first half or so of the book.

That's when Bentley Little lost me.  Not due to his writing, which is always top notch horror.  And not due to the shocks and gasps he throws the reader's way.   What got me was the relative unreality.  And I say relative because, let's face it, when you read horror you have to suspend belief to a certain degree.  I will readily do that but when your main characters have figured out exactly what's going on and what they are up against and decide, against all logic and reason, that they are going to dig in their heels and stay, I am left scratching my head and wondering why?

In this case, the Welches weren't in such financial dire straits and with nowhere else to go to obligate them to stay.  Perhaps if Mr. Little had written them to be scraping the bottom of the financial barrel, their reluctance to just pick up and leave would have made more sense.  As it was, it seemed that Barry and Maureen were simply being stubborn and refusing to let persons push them around - - despite said persons proving that they were willing to do anything (and I mean anything) to run their homeowners' association exactly as they wished.

As with other Bentley Little books I have read, Mr. Little includes a dash of supernatural to his horror tale which will intrigue and please readers fond of the supernatural genre.

While this book didn't live up to my standards, I still enjoyed it and it definitely let me with chills and grateful that I don't live in a neighborhood with a homeowners' association.

The Association is available for purchase now at major booksellers, including Amazon.   I am an Amazon affiliate. If you make a purchase through my link, I will receive a small commission. 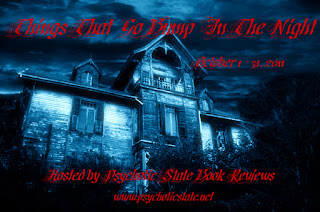 Email ThisBlogThis!Share to TwitterShare to FacebookShare to Pinterest
Labels: Bentley Little, The Association, Things That Go Bump in the Night

Can anyone tell me why he didn't include what happened to Chuck and Danna?

Can anyone tell me why he didn't include what happened to Chuck and Danna?