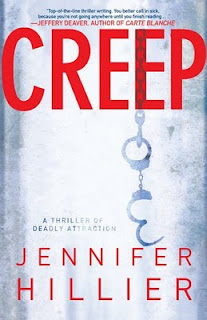 BOOK DESCRIPTION:  Pulsing with the dark obsession of Radiohead’s song “Creep,” this taut thriller—Jennifer Hillier’s superb debut—rockets from its seductive opening to a heartpounding climax not easily forgotten.

Dr. Sheila Tao is a professor of psychology. An expert in human behavior. And when she began an affair with sexy, charming graduate student Ethan Wolfe, she knew she was playing with fire. Consumed by lust when they were together, riddled with guilt when they weren’t, she knows the three-month fling with her teaching assistant has to end. After all, she’s finally engaged to a kind and loving investment banker who adores her, and she’s taking control of her life. But when she attempts to end the affair, Ethan Wolfe won’t let her walk away.

Ethan has plans for Sheila, plans that involve posting a sex video that would surely get her fired and destroy her prestigious career. Plans to make her pay for rejecting him. And as she attempts to counter his every threatening move without her colleagues or her fiancé discovering her most intimate secrets, a shattering crime rocks Puget Sound State University: a female student, a star athlete, is found stabbed to death. Someone is raising the stakes of violence, sex, and blackmail . . . and before she knows it, Sheila is caught in a terrifying cat-and-mouse game with the lover she couldn’t resist—who is now the monster who won’t let her go.

Read author Jennifer Hillier's debut work, an extremely commendable outing, and I venture to guess that you will never listen to Radiohead's song "Creep" quite the same way again.

Writing thrillers can be a slippery slope - - not intense enough and the reader can quickly lose interest and not feel that sense of urgency that is so necessary in order to bond with the hero or heroine.  Too intense and the book can easily become an exercise in gratuitous violence.  Ms. Hillier manages to find that fine line to walk, or write as it were, that balances a suspenseful psychological thriller with the inner workings of a serial killer.

I liked that our heroine Sheila was over thirty-five, a smart professor who has been trained in psychology and the way the mind works . . . and she didn't see the deviant personality in front of her.  Scary and all too true as many of these personalities manage to put on a very different face for public consumption.  Sheila was also a flawed individual - - a former addict whose infidelity may cost her everything, including her life.

Her nemesis, Ethan, is so craftily defined you very nearly sympathize with him.  Yes, it's hard to imagine but pick this book up and you'll see what I mean.  He's cunning and sly and yet oddly vulnerable at the same time.  Ms. Hillier does an incredible job in weaving the character's deep seated issues and tendencies into his core, while presenting him as both earnest and painfully manipulative.

The writing is tense and first rate, with the gripping story and Ms. Hillier's vivid descriptions.  She doesn't merely sketch out a scene; she takes you there and drops you right into the middle of the action.  Even the most minor characters in the book have a well drawn out face and their voices speak clearly to you on each page.

Creep is a fast, heart pounding and intense read - - an exciting one that will hold your attention until you read that last word.  It takes stalking to a new level, one that you won't forget anytime soon.   I would definitely recommend Creep to any reader of the mystery/thriller/horror genre, without reservation.

Thank you for the excellent debut work, Ms. Hillier.  I look forward to your next book!

Creep is available for purchase at major booksellers now, including Amazon.  I am an Amazon affiliate. If you make a purchase through my link, I will receive a small commission.

For more information on author Jennifer Hillier, please visit her website or her blog.

Review copy of this book provided by Gallery Books, a division of Simon & Schuster, in exchange for a fair and honest review. In no way did the provision of the book affect the outcome of my review. 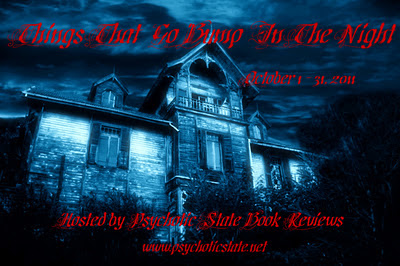 This was such an amazing written review, you make me want to read it next. I have this on my Wishlist but seriously your review as made me say read soon.

Thank you, Marce! I'm glad you enjoyed my review.

Stick around - - "Creep" may very well be one of the giveaway items at the end of the month!

I know as authors we're not supposed to respond to our reviews (at least that's what they tell me!) but I had to say thank you. It's not often I get to read such a detailed and insightful review of my work, and I really can't express enough how much I appreciate it! Thank you so much for reading CREEP and for taking the time to review it so thoroughly here. If you do decide to do a giveaway, I would be more than happy to supply you with a signed (personalized) copy of the book.

Jennifer,
Thank you so much for taking the time to post and appreciate my review. We reviewers love hearing that authors read our reviews!

I thoroughly enjoyed Creep and I look forward to your next book.

I am emailing you directly about a giveaway. Thank you so much!